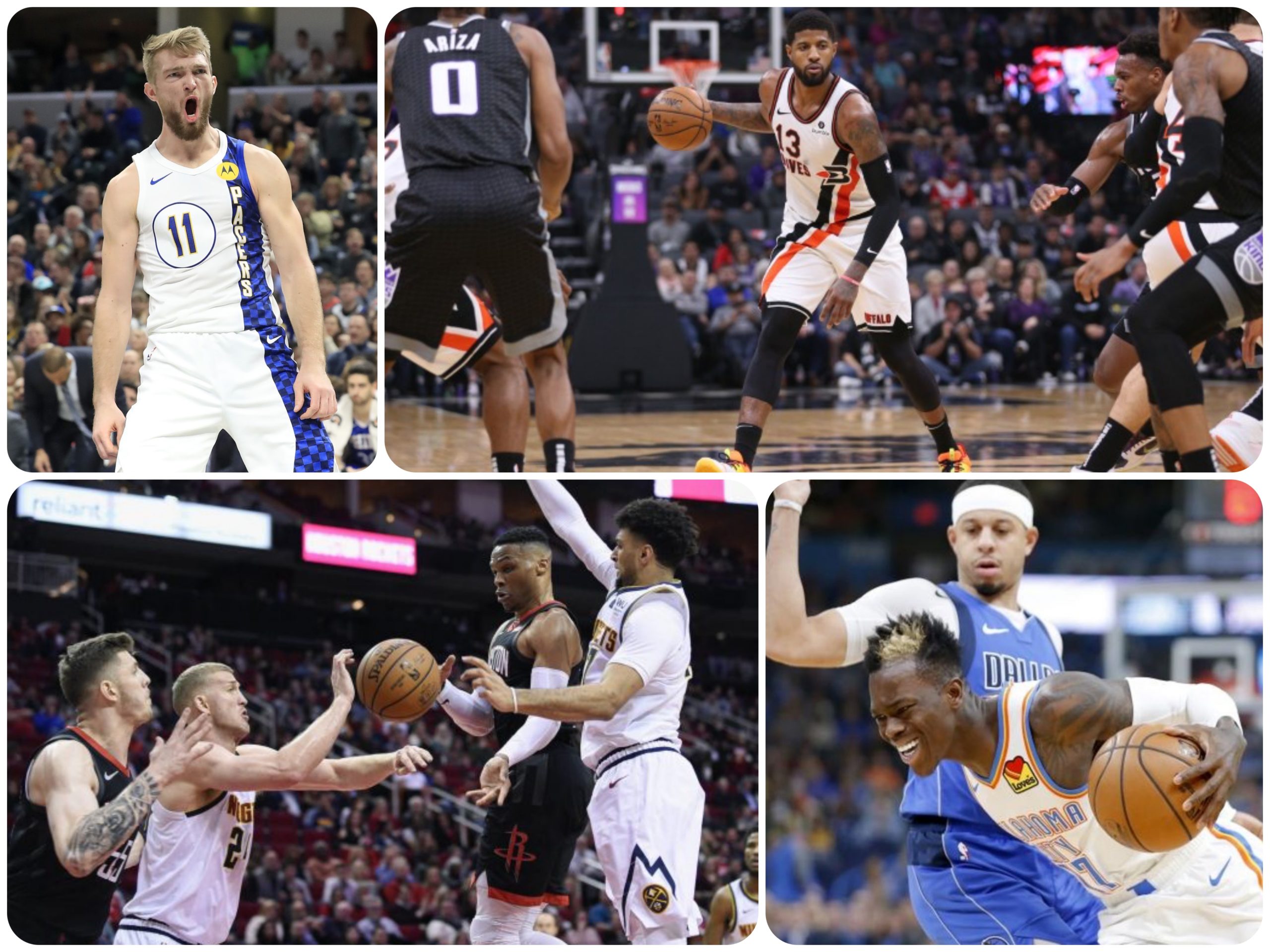 A great night for the Oklahoma City Thunder (w/Dennis Schroder) and former Thunder players James Harden, Russell Westbrook, Domantas Sabonis, and Paul George as we closed out 2019 and welcomed 2020.

There were seven games dotting the NBA landscape on New Years Eve, and while it was shocking to see the Philadelphia 76ers down by as many as 36 points yesterday afternoon, nothing was more exciting than the Oklahoma City Thunder gaining ground in the Western Conference by beating the Dallas Mavericks to close out the game, night, year, and decade.

Hope for many teams in 2020. If Oklahoma City can ‘rebuild’ like this, anyone can do it.

Anything less is all hot air and excuses.

If it was only as close as the final score indicates. The Indiana Pacers led the Philadelphia 76ers by as many as 36 in yesterday afternoon’s game at Bankers Life Fieldhouse, finishing with an 18 point victory and leading the Sixers by .08 points in the Eastern Conference standings. The Pacers had seven players hit double digit scoring, three of them off the bench, while the Joel Embiid-less Sixers only had #VFL Josh Richardson and Ben Simmons venture into that territory. Richardson led the Sixers with 20 points, which was his total at the end of the third quarter. The Sixers have lost three straight and six of their last nine.

NEXT GAMES
Nuggets at Pacers – Thursday
Sixers at Rockets – Friday

Talk about your polar opposites – the Boston Celtics have won six of their last seven games while the Charlotte Hornets have lost six straight. The Celtics swarmed the swarm in the first half last night, outscoring the host Hornets, 50-43. It happened again in the fourth quarter, as Boston closed out the win with a 29-19 fourth quarter. The Celtics shot 45 percent on the road in Kemba Walker’s second return to The Hive this season, and outrebounded Charlotte, 54-41.

NEXT GAMES
Cavaliers at Hornets – Thursday
Hawks at Celtics – Friday

How tight are things in the Western Conference? With their loss to the visiting Los Angeles Clippers last night, the Sacramento Kings tumbled from ninth in the West to 13th. 2019-20 doesn’t appear to be much better than Dave Joerger’s 2018-19. Then there’s that whole Dewayne-Dedmon-giving-up-minutes-to-a-much-improved-Richaun-Holmes-so-I-want-a-trade-thing. The Kings are a mess, and not just in the front office. When the Clippers can come to town and only have four scorers in double digits to Sacramento’s two, it’s an easy bet that it won’t work out for the Kings. Again.

NEXT GAMES
Pistons at Clippers – Thursday
Grizzlies at Kings – Thursday

If you thought the 36-28 opening quarter lashing the Houston Rockets put on the Denver Nuggets was impressive, you hopefully stuck around for the 38-15 fourth quarter ass whooping. The Nuggets may have had six double digit scorers, but when the Rockets’ five double digit scorers score more points, then you have the massacre you had last night. Denver’s six combined for 84 points – three more than James Harden, Russell Westbrook, and Isaiah Hartenstein (or Clint Capela – you pick).

NEXT GAMES
Nuggets at Pacers – Friday
Sixers at Rockets – Friday

In recent conversation with a colleague in the industry why the San Antonio Spurs seem like such a boring team to watch. He replied, “Because they have no leadership.” The Golden State Warriors have the same issue, leadership is differently nightly because their leaders of the recent ‘Golden’ years are sitting on the sidelines with injury. Perhaps the fact that both teams are rudderless is why they played to a 100-100 tie before the Spurs won out in overtime last night. Golden State’s persevering rudder – Draymond Green – nearly had a triple double with 10, 10, and nine in the game. But what’s San Antonio’s excuse? LaMarcus Aldridge hasn’t been the same player since he quit in Portland, and DeMar DeRozan isn’t the guy he was in Toronto, either. To be continued …

NEXT GAMES
Warriors at Timberwolves – Thursday
Thunder at Spurs – Thursday

A 32-18 second quarter performance from the Toronto Raptors put enough distance for the team to post a 20 point win over the visiting Cleveland Cavaliers. The season seems like two mini-seasons so far for Toronto, with Kyle Lowry and Serge Ibaka out with injury early on while Pascal Siakam and Fred VanVleet held things together. Now, with VanVleet having been out right after Lowry and Ibaka came back, and then Siakam going down (and still out), it is Lowry and Ibaka holding down the fort until all are healthy and playing together as one unit. Through all the adversity, they Raptors are fourth in the Eastern Conference, only 6.5 games out of first with 48 games remaining. Can’t wait for the day when the champs are all healthy once again for the stretch run.

NEXT GAMES
Hornets at Cavaliers – Thursday
Raptors at Heat – Thursday

I said yesterday that I missed being at Chesapeake Energy Arena on New Years Eve. I’d spent five years there from 2009-14, watching the game, interviewing the players, then heading out for chilly New Years Eve celebrations after the game. Something tells me last night’s was one for the books after the Oklahoma City Thunder once again defied the odds this season, and put down the Dallas Mavericks. For as great a season as Dallas has had, only three games and .91 percentage points separate the Mavericks and Thunder. Since starting the season 6-11, the Thunder have gone 12-4 since November 29th. Oklahoma City finished 2019 with six players in double digits and a run to end the game, evening, year, and decade.