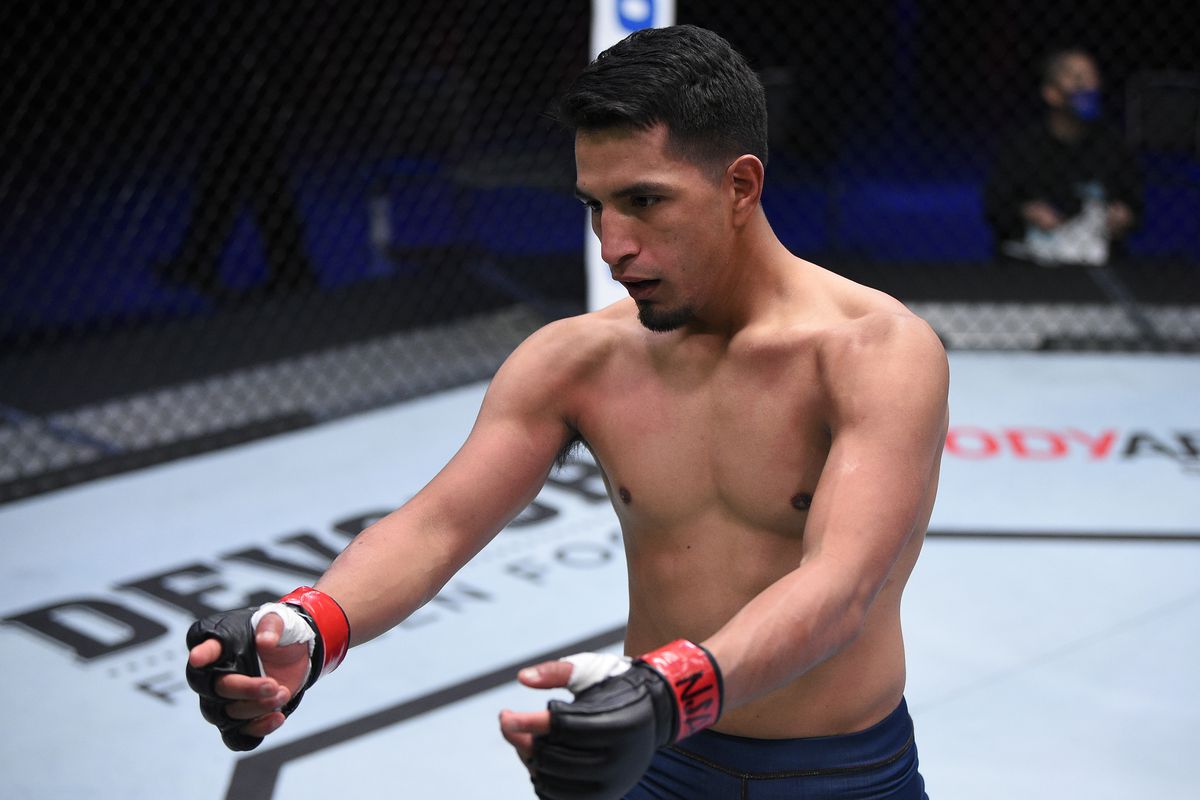 UFC Vegas 12 featured several prelim bouts in which the victor earned a performance bonus, made a big statement, or both.

Miles Johns was surely going to score a decision win over UFC newcomer Kevin Natividad if it went to the scorecards. It appeared as it was heading in that direction; until it wasn’t.

In the blink of an eye, the Contender Series native landed a knee-buckling uppercut that completely flatlined Natividad. The result not only earned Johns $50,000, it was a big response after not looking his best in his previous contest.

“That loss really just freed me up, I feel like a whole new fighter,” Johns told reporters after Saturday’s victory.

Kyler Phillips (8-1) would be a good next fight for the (11-1) Johns. Otherwise, Andre Ewell would make for a fun match-up. Either way, Johns made a big statement by recording the highlight finish and not leaving it to the judges.

Dustin Jacoby insisted that he’d “strike first” in one of his fight week interviews. Talk about staying true to your word. The UFC newcomer was active from the jump, landing 22 significant strikes in just a few minutes of action, before putting Justin Ledet down for the final time.

It was fantastic to see Jacoby find success because few have worked harder to get to the UFC. Or in this case to get back to the UFC. Jacoby was cut by the promotion nine years ago after back to back losses.

After years of competing in organizations like WSOF, Glory, Bellator, and more, the 32 year is thrilled to be back.

“I’m extremely excited,” he told reporters afterwards. “Put in a lot of hard work and it’s finally paying off.”

In the same interview, Jacoby mentioned ‘Shogun’ Rua and Gokhan Saki as possible next opponents. ‘Shogun’ is unlikely to occur, but Saki is feasible. He hasn’t competed since 2018 though. Keep an eye on Modestas Bukauskas as a possibility.

I spoke to Jason Witt earlier this week and he was ever so close to predicting the outcome exactly.

Witt did grind him out in the first round, using his wrestling to achieve and retain top position. ‘The Vanilla Gorilla’ told me something that came exactly to fruition.

You can check off each one of those as having been true. He took down, bloodied, and submitted his overweight opponent.

Witt may not have been rewarded with a performance bonus, but he definitely earned himself a “bigger-name” his next time out. Perhaps David Zawaba? I’d sign off on that.

Strickland fought a great fight versus the durable Jack Marshman. After nearly two years away from the cage, ‘Tarzan’ hardly found himself in any danger.

He kept the striking distance at his range and connected with some heavy blows that would’ve dropped most men. Viewers were able to hear Strickland’s frustration with Marshman’s durability.

While commentating, Michael Bisping provided that Strickland previously believed he was too small for middleweight. At 6’1″ with a solid 76.0″ reach, I don’t think it’ll be a problem.

This kid is going to be a problem in the bantamweight division. Another Contender Series contract earner, Yanez earned himself 50K after recording one of the best knockouts of the year.

The 26 year old Lone Star State native credits the passing of his father for the product we’ve seen in his last two bouts. Quick and powerful, Yanez seemingly has all the tools to be a staple at 135lbs.

It was a big moment when he demonstrated the ability to fend off the takedown attempts of Rodriguez. A well deserved performance bonus for Yanez. Expect him to climb the ranks quickly.

Randy Costa would almost certainly deliver as entertaining. Book it.

Alexander Hernandez was bursting through the seems with confidence heading into his fight with ‘Cowboy’ Cerrone in Jan. of 2019. The future hall of famer gave him a swift reality check.

Loser of two of his last three heading into Saturday had Hernandez keeping his nose to the grindstone and focused. The humbled Hernandez displayed what he’s always been capable of.

Many forget that he stopped Beneil Dariush in the first round in his UFC debut. Saturday was a good reminder that Alexander Hernandez has immense talent.

The FactoryX Muay Thai member may have earned himself a ranked opponent in his next bout. If not, either Brad Riddell or Thiago Moises would make sense.

Prelims often offer more action than the main card, and that was truly the case at UFC Vegas 12. Miles Johns, Dustin Jacoby, Jason Witt, Sean Strickland, Adrian Yanez, and Alexander Hernandez provided one of the most entertaining preliminary cards of 2020.