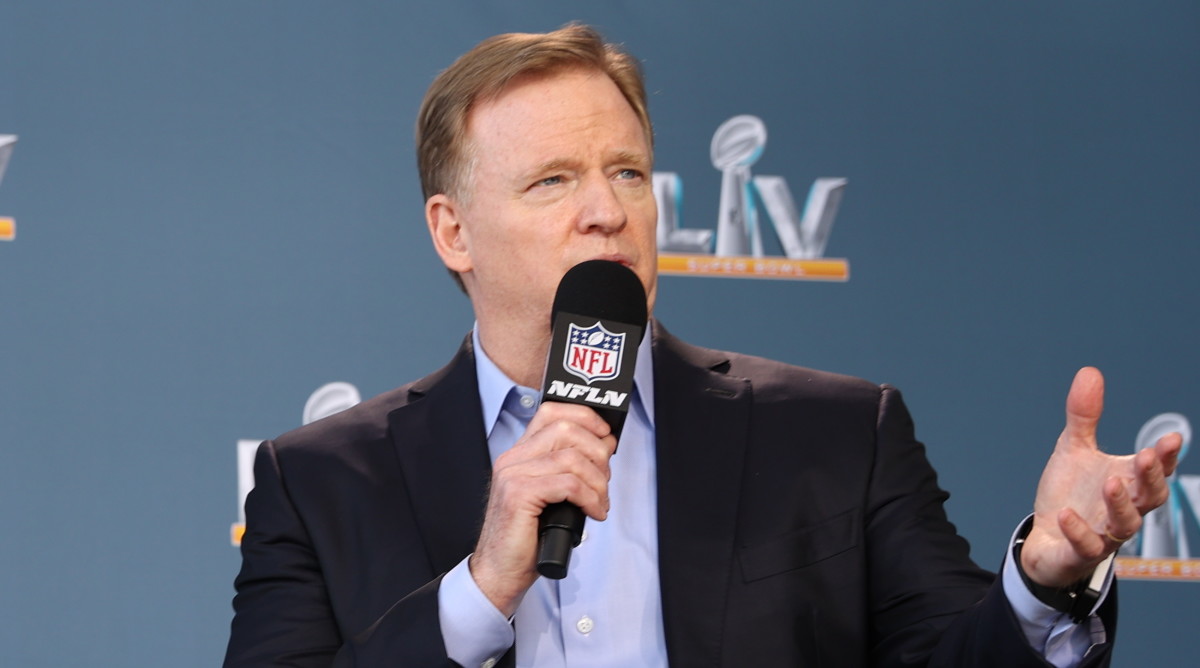 Goodell was happy with how the season went, especially that they managed to play the full 16 game season. He said time and time again that safety was the number one priority. Goodell said the combined efforts of the medical teams and clubs really came through. They were very proud of the protocols they had in place and each outbreak let them get better and better at identifying the source which was the key. For example, the Titans game was rough and they were hard pressed to find solutions. But by the Raven’s outbreak late in the season they identified the source immediately and isolated it.

Goodell said they were proud that they never compromised safety, decisions were only made if something was deemed safe first. The season was one of the most competitive they’ve had. 70% of games were decided by eight or less points, offense was up and penalties were down. Goodell said this shows that the game is in a great place and will continue to grow.

Goodell reiterated multiple times that nothing was set in stone for next year. The most important thing to do was see all the available data and have more discussion. That includes for the offseason and preseason. There has been a lot of talk about canceling OTAs and preseason games considering the season went okay without them. However Goodell didn’t want to commit to anything. He said he’s talked to coaches and they still want it for the rookies.

He had a similar response when asked about how vaccines will affect next season and if international games will come back. Goodell said it will be a wait and see approach. That being said, he warned that things have already changed like the combine. In addition, things have probably permanently changed regardless of how next year goes. Virtual meetings and calls are here to stay. Many protocols that are in place will also stay in place next year.

Goodell said they didn’t work on anything more than increasing diversity in the NFL coaching and front offices. He was disappointed that no African-American head coaches were hired this cycle. But he was happy that they have made overall progress with diversity hires in GM and coordinator positions. There was an idea that was floated about to not let coaching hires until after the Super Bowl because there was a perception that guys like Eric Bienemy were negatively affected. Goodell answered that everyone was allowed zoom interviews which helped Bienemy as well. Overall Goodell said they would continue to have discussions with as many people as they need too, owners, coaches etc until they can solve this problem.

On the Relationship with the NFL Player’s Association

He said the pandemic really made the NFL and NFLPA work together, and as a result their relationship is stronger than ever. They had to work to find solutions to put the season on and they worked it out. They were happy that they managed a CBA extension this year, so twenty straight years with a CBA. While they had their troubles, the relationship has really evolved and progressed because of Covid. A 17 game season is in the CBA, but the details will wait for after the Super Bowl.

On the Game and Other Topics

When asked about Tom Brady, Goodell said he is most likely the greatest of all time with his ability to raise others. Also said Tom is a great person that cares a lot about the game and other people. Goodell said he was proud about how the city of Tampa and everyone involved handled the weird Super Bowl. Furthermore he hoped that owners would give Tampa special consideration in the future given the difficulties and less benefits they’ve had to deal with.

Goodell also responded to two questions about legal matters. He said the investigation into the Washington Football Team’s employee issues is still being investigated and they will take any recommendations or results the investigation brings. On a lawsuit brought forward by two former players that said they were discriminated against in regards to concussions, Goodell said that they do not hire clinicians, that is done by a third party, and it’s more of the courts issue. Finally, on the matter of Colin Kaepernick and social justice for African-Americans Goodell said the NFL wishes they had listened to their players sooner and that Kaepernick should be celebrated for his actions.

Rieter was asked a lot of questions about how the line has handled adversity. They had two opt outs and many injuries but are still in the Super Bowl. He said that resiliency and keeping a level head is key to being an offensive lineman. Rieter also said that the coaching staff has done an amazing job in preparing everyone to play. From the starters to the third and fourth string, the coaches emphasized that everyone needs to be ready to start at a moments notice. Rieter said was not the case on other teams he has been on.

He said preparation overall is their greatest strength. Identifying what the Tampa defensive line was going to do and the tricks they can use would be key to winning on Sunday. There is an immense amount of trust between the linemen, the quarterback (even though apparently Mahomes mispronounced his name until recently) and the coaching staff that any of them can fill in and do the job. That helps with overall cohesion.

He was glad to have Stefan Wisenewski back, and was happy that Andrew Wylie would be available this time after missing the last Super Bowl. When asked about teammate Daniel Kilgore’s haircut situation, Rieter said everyone was having a laugh about it and a lot of memes had been shared. Rieter laughingly said he would need to find out exactly what Kilgore looked like after the conference.

He also answered questions about another story that came out about the linemen and Pokemon cards. He said it started with Wylie who bought a box of cards, and now they are up to 50-60 packs. It’s been a nice nostalgic hobby for them and they’ll be opening packs on Saturday to relax before the game. For the rest of the offense, he loves that they have been incredible at converting 3rd and longs. It really kills the opposing defense, and it really just speaks to the talent they have on offense.

Rieter said he’s been treating the game like any other, just with an extra week to prepare. Very similar to what teammate Damien Wilson said in his press conference yesterday. He’s keeping his personal preparation the same, and even though there will be extra down time with longer tv timeouts and such he is already mentally preparing for it. He is excited to be back in South Florida as he played at USF so it’s a bit of a homecoming for him. He said the entire Tampa defense are big and strong, and that they reminded him of San Francisco’s elite line last year. Said at the end of the day it will come down to the teamwork of their five guys versus Tampa’s four.

That’s the final media day recap for this year’s Super Bowl! Hope you’ve enjoyed getting a bit of a sneak peak into the media press conferences. I know it’s been an awesome experience for all of us at Back Sports Page. Hope you stick with us for more Super Bowl coverage as the game draws closer!

The Evolution of The Quarterback: The 80’s
The Man To Man Podcast Episode IV: Super Bowl Special!