The NBA Summer League has wrapped up, with all five games in the books. The Philadelphia 76ers have made six picks in the last two NBA drafts, and therefore have a lot of exciting players that the fans want to see. Five of those six got major playing time, with Charles Bassey being the lone hold out due to contract negotiations. Of particular interest were guys like 2021 first round pick Jaden Springer and 2020 2nd round picks Isaiah Joe and G-League MVP Paul Reed. The 76ers went 3-2, and their record (average) was fairly indicative of the performances the 76ers needed to see. 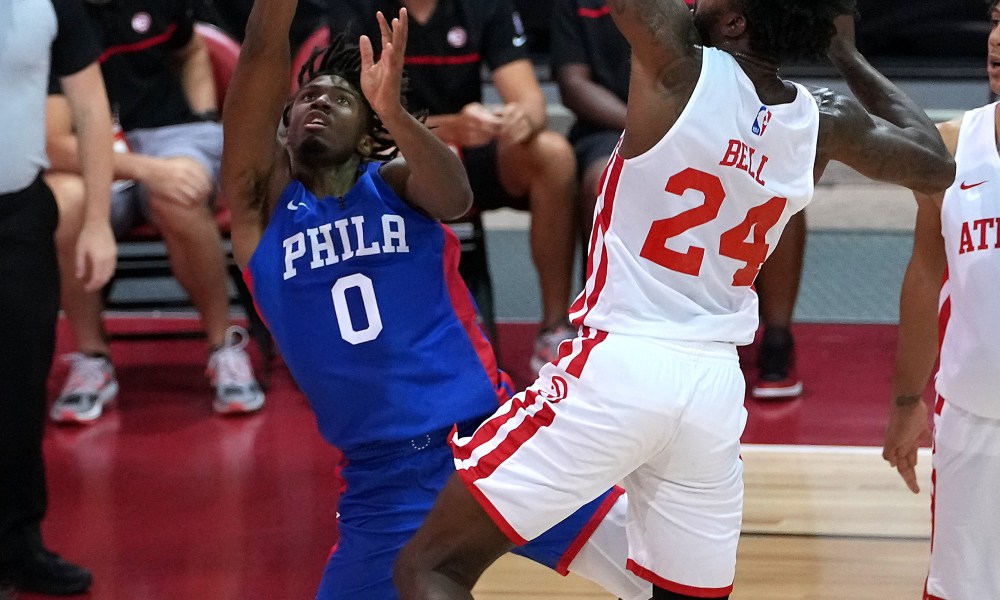 Maxey already proved himself an NBA level player in 2020 with multiple huge performances. Just the fact that Maxey was able to carve out important minutes for a playoff team in his rookie year is incredibly impressive. It’s no surprise then, that when Maxey played in the Summer League he was fairly dominant. In the two games Maxey played, he scored 26 points per game on 50% shooting (and 90.5% from the line), which was the second most points per game of any Summer League player. Maxey is a natural scorer through and through and his ability to drive into the paint and finish is already at an elite level. The rest of Maxey’s game however, is a bit of a work in progress, and there were some encouraging signs throughout the Summer League.

What He’s Working On

The biggest point of improvement for Maxey is his three point shooting. Currently, his offensive tool box is fairly one dimensional. He’s got a good handle, he’s crazy quick and he’s got a number of effective finishing moves, especially his floater, but all of that falls under his ability to attack inside. Clearly there was an emphasis to have Maxey expand his range in the offseason, and he certainly wasn’t shy about shooting from distance. The results were mixed. Maxey took a lot of his shots off the dribble, which is a good thing. He’s not afraid to create himself, and he’s shown some flashes, but it can’t be ignored that he shot just 28.6% from deep on seven attempts per game in his two games this summer. Maxey doesn’t need to become an elite sniper from deep, but 28.6% is not even serviceable yet. Opposing teams will be happy to have him shoot if that’s the case. It’s great to see Maxey trying it, and a guard that can create offense on three levels by himself is exactly what the 76ers need, but the three levels aren’t there yet.

Maxey’s playmaking has also been questionable. He’s never been one to reliably set teammates up, and his lack of ability on that end led to the 76ers needing to acquire George Hill to attempt to find that bench playmaker. Similar to the three-point shooting, it was just okay in the Summer League. He kept his head up slightly more on drives to find kick out opportunities, but overall he had just 4.5 assists per game to two turnovers (or a 2.25 AST:TO ratio). That’s not bad, but you’d like to see more playmaking from your lead ball handler.

The last concern with Maxey was his size. At 6’2 there were possible concerns that he could be taken advantage of on the defensive side of things. Fortunately, that’s an area Maxey has absolutely improved. Maxey has credited the defensive superstars that the 76ers have like Ben Simmons and Matisse Thybulle with his growth on that end, and it’s showing on the court. Numbers-wise, he averaged two steals and a block, which is already pretty good, but beyond the numbers he had a lot more strong defensive plays that don’t necessarily show up in the stat sheet.

Overall, Maxey proved that he was too good for the Summer League, which is why we only saw him twice. Maxey already has some elite skills, and has shown tremendous growth in his short time in the NBA. The 76ers may not have addressed their biggest needs in the 2021 draft, but that could easily be because they are betting that Maxey will give them the self-creating offense and playmaking they desperately need. It’s not a bad bet at all.

Springer has also been pretty much as advertised, in a good and bad way. Defensively, he’s been great. He’s got active hands, doesn’t get pushed around, constantly hounds ball handlers and plays passing lanes. That being said, the offense is still missing. It’s not a surprise, as that was a flaw in college and it’s not like there’s been a ton of time in between now and the draft, but it’s been a struggle for most of the preseason. Overall, he shot 37.9% from the field, and shot over 40% just once in the five games he played. Furthermore, he had just 2.6 assists and 1.8 turnovers per game. He didn’t really play as a point guard in any of the games he played, but that was his drafted position.

Springer had a couple highlight drives, but his struggles shooting the ball are concerning. There is a good chance his high percentage in college was indeed a smokescreen. He shot a dismal 13.3% from three, and it was on three attempts per game, which isn’t a tiny amount. With how many elite defenders are already on this team, it’s not enough for Springer to just be good on defense. If he can’t figure the offense out, the chances of Springer contributing this season are getting slimmer with each preseason game. 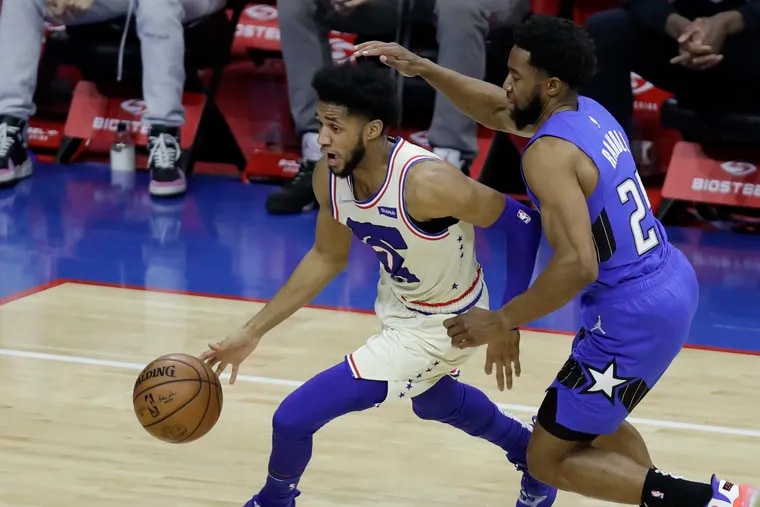 Joe is a guy that many had high hopes for to contribute this year. The league always needs shooters and Joe is nothing if not that. Overall, it hasn’t been a bad summer league for Joe, but it hasn’t been amazing either. There are a lot of fairly entrenched starters on this 76ers team, and Joe needs to prove he’s worth using over one of them. Right now, he’s not doing that. 14 points on 34.7% shooting is pretty bad. Nearly all of his attempts are from three, which is good, and just like in college he lets it fly with regularity. 37.5% on 10 threes per game actually isn’t bad, but is it much different than what Furkan Korkmaz offers? Or Seth Curry, or Danny Green? Not really.

Joe is also fine defensively, and having depth in the regular season is important so he’ll definitely get some time. That being said, is he someone that is going to play significant minutes? Probably not unless there’s a ton more development he can show. Joe is still young, and he’s got the chance to be the wing of the future, possibly becoming an elite duo with Matisse Thybulle. Right now though, Joe probably isn’t quite ready to contribute in the playoffs. Unfortunately, Joe suffered an injury in the fourth preseason game, so he lost another chance to prove himself.

Paul Reed continued his G-League MVP run with a strong Summer League showing. He’s filling the stat sheet in a number of ways, and doing it efficiently: 17.4 points on 55.6% from the field, and 12 boards a game. That’s not even mentioning his 2.2 assists, 2.6 blocks and 2.2 steals per game. He’s also shooting a very nice 82.4% from the line, which is so crucial for bigs these days.

Elite two-way production has been the name of the game for Reed his past two years in what you could call Triple-A ball, which means the question naturally turns to when is he getting called up to the show. His production will probably give him a shot eventually, especially since the power forward spot is currently weak depth wise, however the problems that made him such a late pick are still relevant.

He’s only 6-9 210 pounds, which would be fairly light for a straight-up four, yet his skillset is much more in line with a traditional center. He doesn’t shoot threes or space the floor much, which makes him a hard sell next to many of the shooting deficient members of the 76ers. There’s probably some staggered rotation out there that works, but a Maxey, Shake Milton, Thybulle, Reed and Andre Drummond lineup (the primary backups) sounds like a nightmare spacing wise.

Still, Reed has been incredibly productive now every time he’s gotten to play, and his athleticism is the real deal. That back up forward spot is ripe for the taking, and it wouldn’t surprise anyone to see Reed go out and grab it. 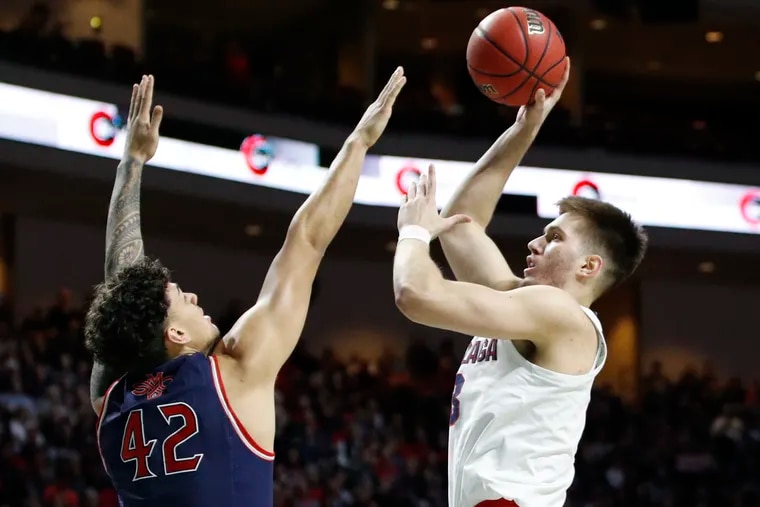 The final young gun on the 76ers Summer League team, Petrusev hasn’t seen nearly as many minutes as the other four. He’s only averaging 17 minutes per game, and there are a lot of guys ahead of him in the shot priority queue right now. Springer, Joe and Reed (also Maxey when he’s in) have the go-ahead to take a majority of the shots, which really doesn’t leave much for Petrusev. For that reason, there isn’t much to draw from his play so far.

The one exception has been defensively. Petrusev definitely has the height to be a rim protector, but there were concerns about the weight and overall athleticism. In his first three games (he only played eight minutes in the fourth game) Petrusev had eight total blocks. He’s shown good positioning and moves his feet well. Petrusev has yet to show the offense that he was drafted for, especially since he hasn’t taken a single three yet, but it’s been a decent showing for the 50th overall pick. Petrusev didn’t get to play in the last preseason game from coach’s decision, which could mean he’s closer to being in the lineup than thought, or so far away from it didn’t seem worth it to play him.

With the Summer League done, things have shaken out probably as many expected, which is both good and bad. Maxey was unstoppable, and considering he held his own in the NBA that wasn’t shocking. He’s shown development in the three areas he needed to the most, although he’s doing better in some areas than others. Springer has been as advertised, and he’s really young so there’s nothing to be concerned about. The chances of Springer contributing on this current 76ers team though, is slim to none if he can’t figure out the three ball.

It’s a similar story with Joe and Reed. They’ve mostly done what they did last year, but Reed gets the benefit of positional scarcity, and Joe wasn’t lights out from deep, merely good. Finally Petrusev hasn’t gotten much chance to shine yet, but will hopefully get his time soon. Overall, besides Maxey, Reed looks the most poised to break into the squad in a significant way. Joe will see minutes, but barring injuries or Joe taking another step shooting wise he’s more of a 11th or 12th man, while Springer and Petrusev are simply too young.