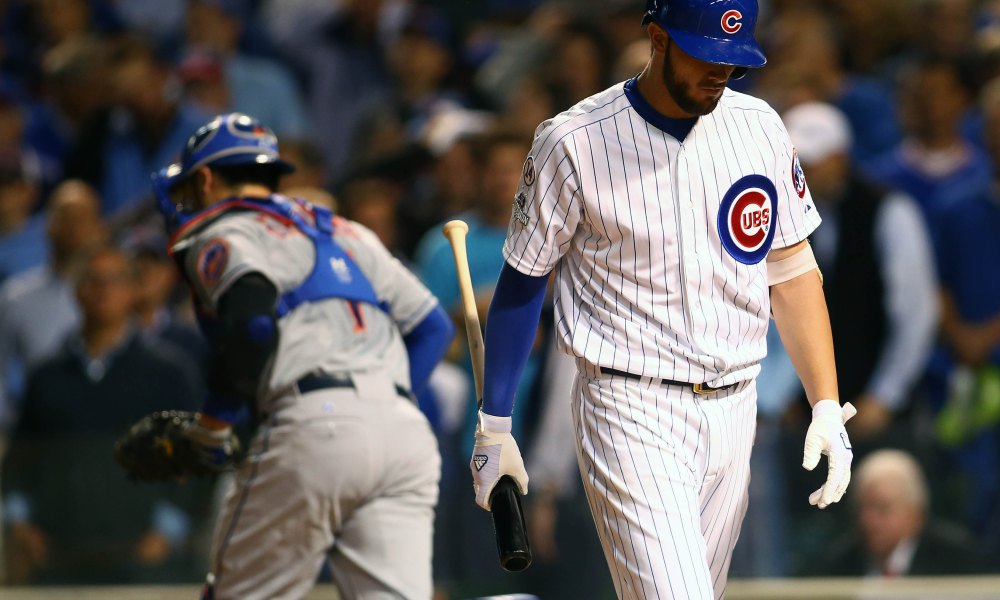 After their seventh straight loss on Tuesday night, the Cubs have been eliminated from postseason contention. This season will be the first since 2014 that Chicago has not appeared in the playoffs. Despite leading the NL Central for a large portion of the year, the club faltered down the stretch and was ultimately unable to hold off the surging Cardinals and Brewers. Now, many fans of the team are left wondering: what happened? The following is an attempt to break down the team’s unraveling, piece by piece.

Pitching: In today’s era of launch angles and juiced baseballs, having an effective rotation and bullpen are more critical to success than ever before. The Cubs staff combined for a team ERA of 4.05, which ranked seventh best in all of baseball. The 2016 World Champion Cubs combined for an ERA of 3.15. On the surface, the bullpen appeared to struggle. That perception emerged thanks in large part to 28 blown saves, tied for third most in the MLB this season. Aside from the memorable late inning letdowns, the Cubs’ bullpen performed fairly well. Relievers for the team combined for a 3.93 ERA, which was the seventh best mark across both leagues. Players such as Rowan Wick, Steve Cishek, Tyler Chatwood, and Brandon Kintzler outperformed expectations and shined brighter than the higher profile arms at the back of the bullpen. Craig Kimbrel and Pedro Strop were supposed to be anchors for this staff, yet Strop stumbled to a 4.99 ERA and Kimbrel was even worse with an ERA of 6.53. Another big source of disappointment in the bullpen was Carl Edwards Jr. Once a prolific late inning stopper, Edwards completely unraveled this year to the tune of a 5.87 ERA, before ultimately being traded to the Padres for next to nothing.

The starting rotation faced a fair share of difficulties throughout the year as well. It was not a good year to be a left-handed starter for the Cubs as Jon Lester, Cole Hamels, and Jose Quintana all had underwhelming seasons. Kyle Hendricks provided some stability with a very respectable 3.46 ERA across 177 innings of work. The real story of the starting rotation was the dominant second half by Yu Darvish in which he recorded a 2.76 ERA and a .808 WHIP. Darvish’s rough beginning to his Cubs career was well documented. After managing to throw only 40 innings in 2018 before being shut down due to injury, the Japanese pitcher’s contract had become a common criticism of Chicago’s front office. Darvish silencing the doubters and returning to form with strong pitching was one of the lone bright spots down the stretch for the Cubs. Darvish’s win-loss record (6-8) hardly conveys just how effectively he pitched. Oftentimes he would have his leads erased by bullpen mishaps, as was the case in a September matchup against Milwaukee where the pitcher threw 5 shutout innings only to receive a no-decision.

Fielding: This aspect of the game is often overlooked by fans but ultimately run prevention is equally as important as run production. Playing clean defense was a staple of the 2016 Cubs’ success. This year’s Cubs team was not so polished defensively, committing the fourth most errors (116) in all of baseball and the second most in the NL. Third baseman Kris Bryant was one of the primary culprits, committing 15 errors on the year. In a season where balls left the park at a historic rate, teams simply can not allow so many second chances to opposing lineups. The team also allowed the fourth most stolen bases (88) in all of baseball. Allowing that many steals comes as a surprise with rocket armed catcher Wilson Contreras behind the plate, but Contreras missed time with injury and only allowed 37 of the 88 steals.

Shaky defense not only has an immediate negative impact in a game but can also have further reaching implications. Pitchers who lack confidence in the defensive unit behind them are more likely to nibble at the corners of the strike zone instead of having the trust to pitch to contact. Pitchers then are placing more pressure on themselves to perform and are going to drive up their pitch counts by throwing less strikes. Ironically, when pitchers aren’t trusting their defense and less balls are being put into play, the defense behind them may lose their rhythm and become even more unreliable. Many things are bound to go wrong in a 162 game season, but amongst all the chaos and variability it can be comforting for teams to be able to rely on fundamentally sound play in the field. This was not a luxury that the 2019 Cubs had at their disposal.

Road Games: Some may say the impact of home field advantage in sports is overstated, but the 2019 Cubs would beg to differ. The club looked the part of a playoff team at home in The Friendly Confines with a 51-30 record. In home games, Chicago pitchers had a collective 3.50 ERA and the team scored 5.21 runs per game at Wrigley Field. On the road, the Cubs finished the year with a lackluster record of 31-47. Scoring dropped to 4.81 runs per game in road contests, with the team ERA ballooning to 4.66. Production splits were much sharper for pitchers than hitters, but the team as a whole appeared uncomfortable playing away from home. Of the 10 playoff teams, not one had a losing record on the road. If you had to pinpoint the one factor that really separated the Cubs from other playoff contenders, inability to get the job done on the road would be the answer.

Injuries: Several key contributors to the club, Such as: Bryant, Baez, Contreras, and RIzzo, fell victim to the injury bug throughout 2019. Unfortunately, most of these incidents occurred in the second half of the year ,when Milwaukee and St. Louis were playing their best baseball. Contreras missed a little over a month with a hamstring injury suffered at the beginning of August. All Star shortstop Javier Baez suffered a hairline fracture in September that ended his season save for a couple of pinch running appearances. First baseman Anthony Rizzo suffered a sprained ankle in mid-September that was supposed to keep him in a walking boot for a full week. The longtime Cub ended up returning after just a couple of days and heroically played injured to try and lead the team to the postseason. Bryant dealt with a lingering ankle issue for most of the second half before ultimately being shut down after slipping and hurting his knee on a wet base. Hamels missed time with an oblique strain and never really looked like himself even after returning from the injured list. Kimbrel and Kintzler also missed time which further weakened a bullpen that struggled to perform in the clutch. Injuries were certainly not the sole reason that this team failed to live up to expectations, but the team did have a tough go at staying healthy.

Inconsistent Offense: The Cubs struggled to find sustained traction at the plate this season. The offensive output was often feast or famine. Some days, the hitters showed up and put up 10 runs without breaking a sweat, and some days they had to fight tooth and nail to put a single tally on the board. Part of the problem was that Chicago relied heavily on the long ball for scoring. Cubs hitters managed to combine for the sixth most home runs in baseball but struggled to drive in runs. This was problematic because it allowed opposing pitchers to zero in on avoiding home runs, without having to worry about the Cubs beating them in other ways. Poor situational hitting and lack of well rounded approaches was a huge issue for the team as they struggled to produce runs on days where no home run power was to be found.

In particular, the leadoff spot plagued the club throughout the season. Manager Joe Maddon never really had a reliable option to set the table at the top of the order. A variety of players such as: Jason Heyward, Kyle Schwarber,  and Albert Almora were given a chance at the top of the lineup, but all of them disappointed. In fact, the players occupying the leadoff spot combined for a .295 on-base percentage, the lowest of any lineup spot other than the ninth (pitcher) spot in the order. Needless to say, that level of output is not acceptable for a spot where you would prefer to have one of your highest on-base percentages to create RBI opportunities for the heart of the order. Baseball is a game of runs, both literally and in the sense of being able to string together wins and ride waves of momentum. The Cubs were never really able to enjoy any periods of sustained success in 2019. The bats never seemed to heat up for more than a couple days at a time.

These are just some of the reasons that combined to derail the Cubs’ 2019 season. The beauty -and agony- of baseball is that not everything can be logically explained. There are always intangibles at play that undoubtedly affect the outcomes we see in the standings. Whether it be luck, heart, chemistry, confidence, or even curses, there is always more to this game than what can be observed from the surface. The good news for fans of the Cubs is that there is always next year.

Note: Many critics of the team cast blame at Manager Joe Maddon for the failures of the 2019 season. Stay tuned for an article coming soon discussing Maddon’s impact on the season and his future in Chicago.

Big Blue Report: Giants-Redskins Preview, Coughlin On Eli and More!
A Day in the Life of a First Time Yankee Reporter