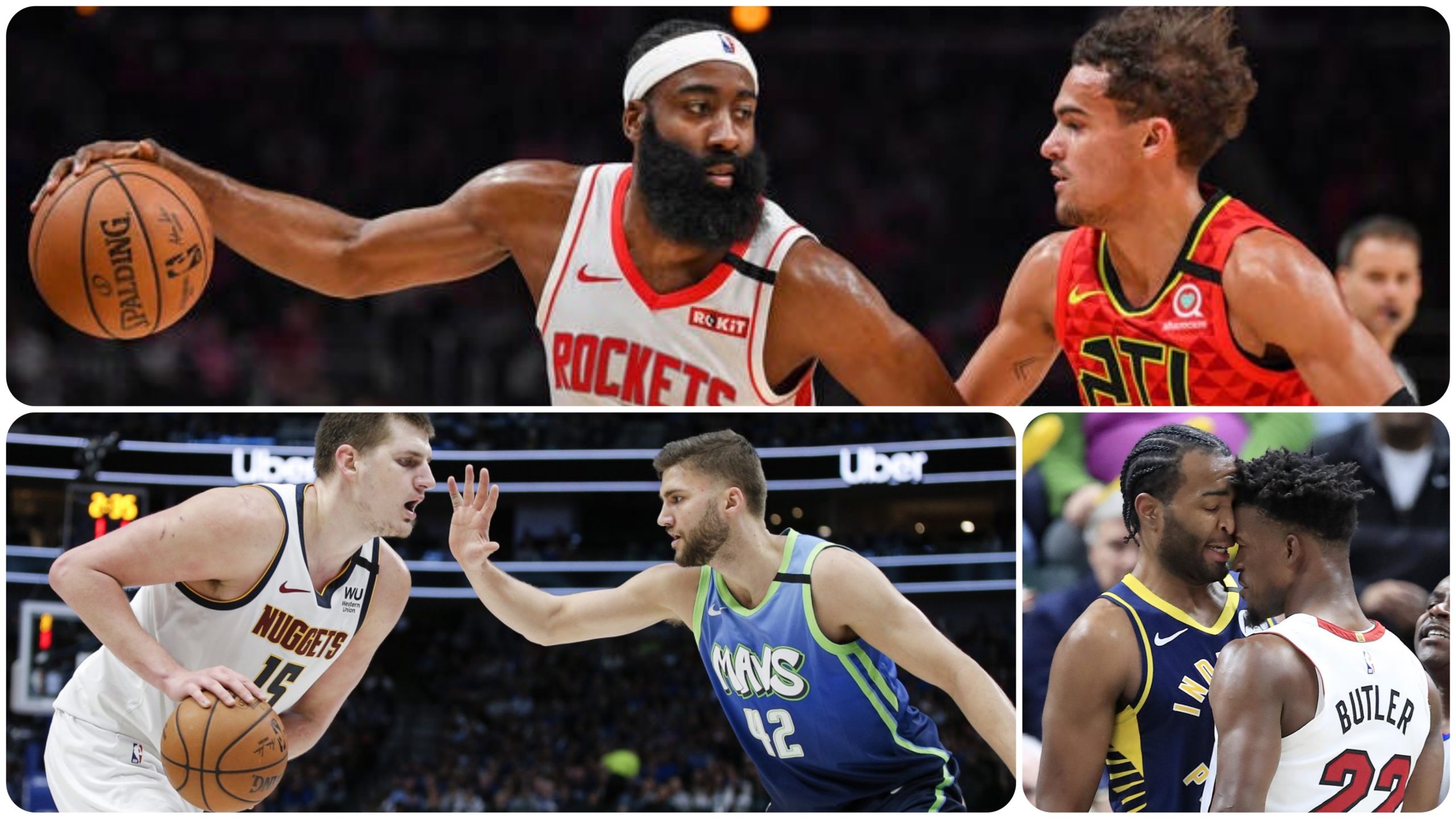 James Harden and Trae Young put on a show in Atlanta last night, Nikola Jokic and Luka Doncic had the best TV game, and things got testy between T.J. Warren and Jimmy Butler after a Heat win.

With nine games on the slate last night, we were treated to some tight competitive games with playoff positioning a factor as we approach mid-season.

There were also a good number of blowouts from teams you might not have expected to see do that, and we got to see a Washington team fully implode as their starters combined for 28 points …

The San Antonio Spurs jumped out with a purpose on the Boston Celtics last night in Beantown, scoring 30+ points in all four quarters to snuff the Celtics with a 15 points win. Kemba Walker must have still been affected from flu-like symptoms, because his judgment on whether to challenge NBA officiating got him tossed with double techs after returning from a three game absence. Jayson Tatum and Jaylen Brown combined for 30, as much as DeMar DeRozan put up on his own.

NEXT GAMES
Celtics at Sixers – Tonight
Spurs at Grizzlies – Friday

Miami spent the first three quarters running the score up on the Indiana Pacers that the Pacers’ 36-22 fourth quarter simply made the final score look palatable for the home team last night. The Heat ended up with seven players in double digits, led by rookie Tyler Herro. Indiana had an impressive game from Domantas Sabonis, but other than 28 combined points from the Holiday Brothers (Aaron, Justin), he got little help.

NEXT GAMES
Heat at Nets – Friday
Pacers at Bulls – Friday

If you thought the Orlando Magic making the Washington Wizards disappear on New Years Day (122-101) was a nice trick, you should have seen the vanishing act they performed last night in front of 16,013 at the Amway Center. Orlando dusted the Wizards in every quarter to glide to an easy 34 point win, with Washington’s starting lineup combining for a meager 28 total points.

NEXT GAMES
Hawks at Wizards – Friday
Magic at Suns – Friday

The Charlotte Hornets gave it everything they had against the reigning NBA champions last night, in what was arguably their best team performance of the season. Things got testy at the end of the overtime period, one in which Terence Davis had two three point hits to help the Raptors to the win. He and Terry Rozier had to be separated as both teams tried to head to their respective locker rooms. If the Hornets can only keep that intensity the rest of the season.

NEXT GAMES
Hornets at Jazz – Friday
Spurs at Raptors – Sunday

Trae Young did his best to outdo James Harden … and he did. Unfortunately, the rest of the Atlanta Hawks didn’t step up as well as Harden’s teammates did on a night when Russell Westbrook took the night off. Clint Capela was spectacular with 22 points and 22 rebounds, while the Rockets took flight early on, blasting off with a 45-29 first quarter that set the tone for the entire night last night. Young and Harden were the first players to have 40 point triple doubles in the same game.

NEXT GAMES
Rockets at Thunder – Tonight
Hawks at Wizards – Friday

In the most competitive game of the night, Nikola Jokic got the best of Luka Doncic as the Denver Nuggets edged the Dallas Mavericks in their own crib. Jokic led all scorers with 33 points overall, but scored 26 of those in the second half, where the Nuggets outscored the Mavericks, 51-47, to take the win and keep themselves four places and three games ahead of Dallas in the Western Conference standings.

NEXT GAMES
Lakers at Mavericks – Friday
Cavaliers at Nuggets – Saturday

The irony in last night’s game in New Orleans is that both the Pelicans and the Chicago Bulls ended the night at 13-25, with the Bulls at 11th in the East and New Orleans at 14th in the West. But it’s Chicago languishing with little to no more direction than they had a year ago, while the Pelicans see light at the end of the tunnel. New Orleans has gone 7-3 in their last 10 games with Zion Williamson very active in five-on-five scrimmages in practice and a possible January debut.

NEXT GAMES
Pelicans at Knicks – Friday
Pacers at Bulls – Friday

Julius Randle was called to the coaches offices and was visibly upset when he walked out of said office; you knew then that things weren’t going to look good for the New York Knicks, if you even had a sniff that they might pull an upset in Salt Lake City last night. Randle had a DNP for personal reasons. Instead, Jazz fans were treated to a guard battle between former New York guard Emmanuel Mudiay and his former understudy, Frank Ntilikina, which Mudiay and the Jazz won handily. Utah outscored the Knicks in every quarter but the fourth, where the game was already out of reach.

NEXT GAMES
Pelicans at Knicks – Friday
Hornets at Jazz – Friday

Since their Christmas Day loss to the Philadelphia 76ers, which halted an 18 game win streak, the Milwaukee Bucks once again look unstoppable, winning their sixth game in their last seven (the only other loss was to a hungry and frustrated San Antonio Spurs team on Monday night, avenging a loss to Milwaukee two nights earlier). The NBA’s best team did “just enough” to beat the Golden State Warriors in the Chase Center last night in front of 18,064 that are accustomed to seeing their Warriors with a 33-6 record at this time of year, not the visiting team.

NEXT GAMES
Bucks at Kings – Friday
Warriors at Clippers – Friday