Can Aroldis Chapman Bounce Back? 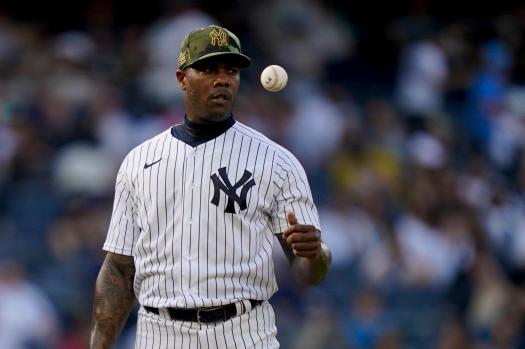 Right:  In this picture, Chapman looks on as he is pitching against the Chicago White Sox in May 2022. The Cuban left-hander is coming off one of his worst career seasons in 2022. However, the Kansas City Royals still believe the veteran flamethrower still has something left in him. Photo Credit – John Minchillo, AP Sports.

Will 2023 be the year of an Aroldis Chapman bounce back? The Kansas City Royals certainly believe so. The two sides agreed on a deal Friday.

Aroldis Chapman is hoping for a bounce back after a down 2022 season. The Kansas City Royals certainly believe he is capable of one. KC and the veteran left-hander are in agreement on a one-year contract as of Friday worth $3.75 million.

Could We See a Renaissance?

Looking back at 2022, Chapman put up disappointing numbers. Before heading to the IL, the Cuban left-hander got lit up for a 4.46 ERA in 43 appearances. And his struggles were rather noteworthy. Our Brian Ramos wrote back in May about the early season missing success for the Cuban 34-year-old.

Chapman not only pitched poorly, he also fell out of favor with the Yankees.  Late in the season, Chapman failed to show up for a team practice, and New York in turn left him off their playoff roster.  Once suspended for domestic violence, this recent incident only adds to Chapman’s awful reputation.

This deal is certainly one that falls in the “high-risk, high-reward” category. With Chapman, his velocity is certainly there, but not like when he debuted in 201o. His numbers have been on a downslide for the last few years. And he also could pose a bit of a chemistry risk to the team. Since Chapman was left off of the Yankees’ postseason roster, he left the Bronx on the lowest of notes.

Chapman is still an electric arm, don’t get me wrong. And, as Lynn Worthy of the Kansas City Star writes, Chapman can provide veteran experience to a relatively young KC bullpen. The Cuban is looking to compete with Scott Barlow for the closer role in 2023.

So, will 2023 be the year of Aroldis Chapman’s bounce back? The veteran flamethrower certainly hopes he can return to form. The Kansas City Royals, who haven’t been active in free agency, also feel the same way. But, of course, only time will tell.