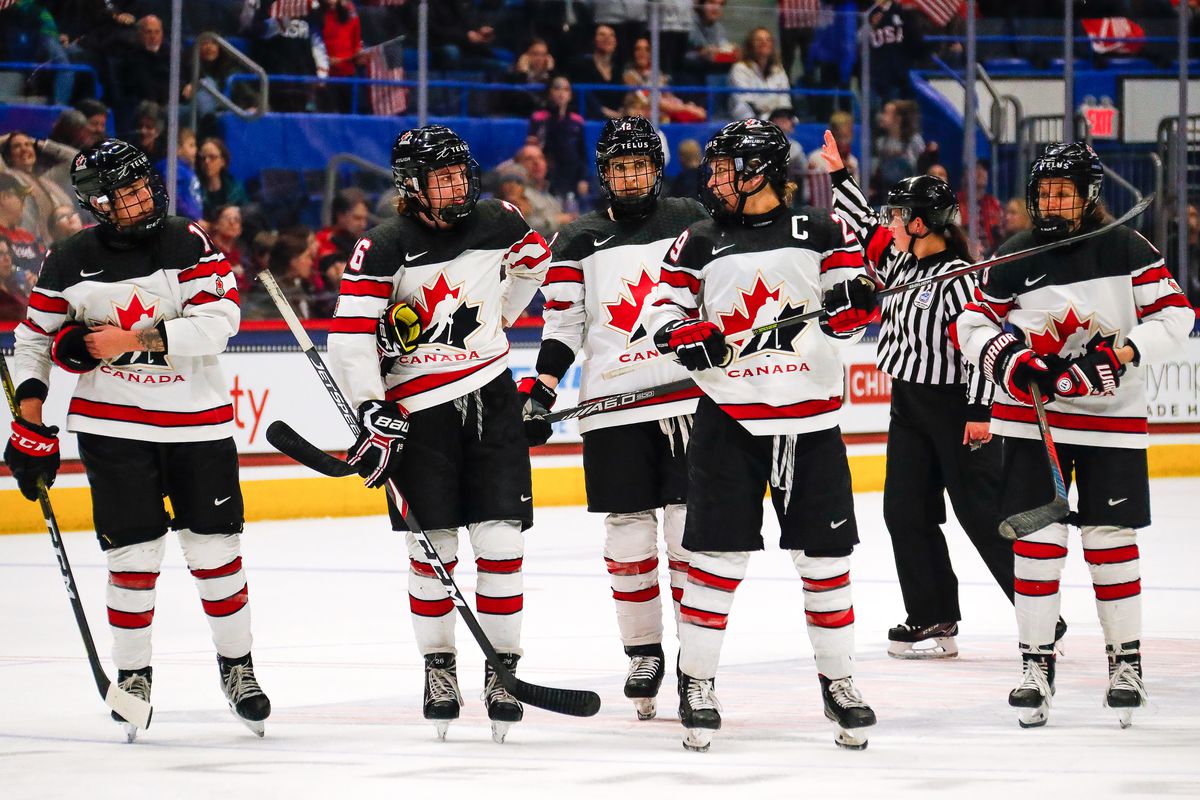 After twelve days, the 2021 World Junior Championship will come to a close with a gold medal game between two hockey rivals, Canada and the United States. Canada cruised to a 5-0 semifinal win against the Russians, dominating the game from the drop of the puck.

Alex Newhook put the Canadians up early in the first period, scoring a goal just 59 seconds into the game. Team Canada put up two more goals in the first period, one an even strength tally by Connor McMichael and the second a power play goal by Cole Perfetti. Braden Schneider tacked on a fourth goal in the second, and Dylan Cozens added to his tournament leading point total with an empty net goal late in the third. With a heavy forecheck and tight defense, the Canadians stifled the Russian breakout and offense, allowing just six shots in the slot (below the top of the faceoff circle and inside the faceoff dots).

The United States, on the other hand, didn’t have it quite as easy. After grabbing a 1-0 lead midway through the first period, the Americans took a penalty and the tournament’s second best power play went to work, tying up the game 1-1. The Finns seemed to jump on the Americans with a heavy forecheck, not allowing the U.S. clean breakouts out of their zone. The United States managed to hold Finland off, though, and found some momentum with a John Farinacci breakaway goal with just under six minutes left in the second period. A high sticking double minor then gave way to a Matt Boldy power play goal, and the Americans seemed confident and in control going into the third period.

The Finns, however, would not give up. They continued their relentless forecheck, and with the offensive zone pressure, cut the United States’ lead to 3-2. A delay of game penalty led to a Finnish power play, and with less than four minutes left to play, Finland tied the game up 3-3. The momentum seemed to be swung completely in the Finns favor, but with the game winding down, U.S. coach Nate Leaman sent out his top line, and they went to work. An Alex Turcotte pass found Arthur Kaliyev, and Kaliyev netted his third goal of the tournament with 1:01 to go, sealing a date with Canada for the gold medal game.

Canada will be the easy favorite going into this game. They’ve dominated the tournament, outscoring their opponents 41-4 and never trailing throughout. They featured a heavy forecheck and an offensive zone system that leans on peppering the defending team with high quality shots. Canadian goaltender Devon Levi has also been excellent, leading all netminders with a .975 save percentage and 0.53 goals against average. The one area the United States may have the advantage in is special teams. The U.S. has the top power play and third best penalty kill of the tournament, compared to Canada, who ranks third and fourth in those categories, respectively.

In order for the United States to pull off the upset, they’ll need a few things: a handful of power plays, great goaltending, and consistent play. The first two should be the easier of the bunch. The United States’ power play, as stated, has been the best of the tournament. Although they only received the double minor against Finland, they still took advantage. If they can snag one or two power play goals, it will be a big boost. Goaltender Spencer Knight has been at the top of his game since struggling in the opener and stopped 33 out of 36 shots against Finland. He’ll be looked to for a big game, and should comply.

The biggest problem for the United States of late has been consistency. In both the Slovakia game and the Finland game, the Americans started well but fell off after scoring their first goal. They looked great in spurts but failed to keep up that high level of play for the majority of the game. After squeaking by Finland, they’ll need to step up their play against the formidable Canadians.

Roster rise, the two teams arguably have the two best lineups in the tournament. Up and down though, Canada has the advantage. If the United States wants to come out on top, they’ll have to buckle down and play a full, solid, sixty minutes of hockey. Otherwise, the 2021 World Junior Championship will close with O, Canada serenading Rogers Place.