Collins, Jacobs Combine Past And Present To Raise Money For the Jay Fund 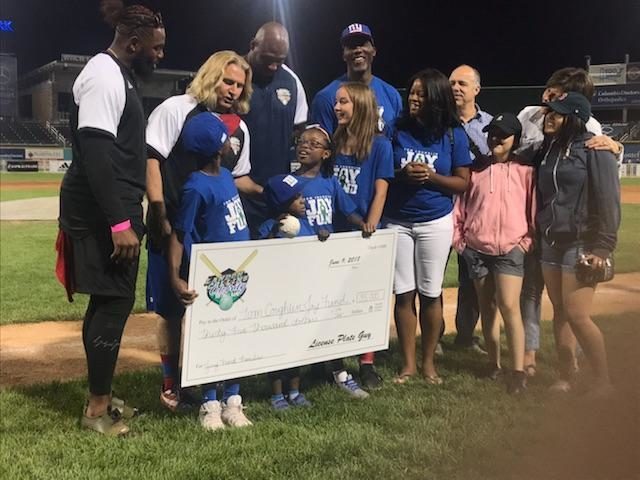 Not easy to follow up a successful first time. Landon Collins, Brandon Jacobs and Joe Ruback had a tough task ahead of them repeating the success they had one year ago.

Last year the trio helped raise over $30k for the Jay fund with past and present members of the Giants family. Last season Eli Manning headlined a whose who of the Giants participating to help raise money for former head coach Tom Coughlin’s Jay Fund.

This year’s line up featured rookie running back sensation Sequon Barkley, former Giant Tiki Barber and many more as it was yet a brilliant night of memories, reunions, and laughter for all involved.

Former Giant Justin Tuck felt it was like a family reunion. “A lot of ways, yeah it is. We do not have a lot of opportunities to be around the younger guys as much as we used to be. Even the alumni guys, I have not seen some of these guys in two or three years so it gives us the opportunity to catch up with them and to hear about their families.”

He continued .”I love the opportunity to get together with the guys who I have not seen in a few years. Landon, Brandon and Joe do did a great job of getting the old guys and the younger guys together and make it a special night. It’s a great opportunity for us to share stories and little things that have helped us and hopefully we could help them.”

Second year Tight End Evan Engram felt that this was a great way for the Giants family to come together.”It shows how big the Giants family is. These are the guys who won the championships connect with us and its very cool thing. Its cool for the young guys, I loved it last year and its for a good event for a cause and it helps build our team moral for the future.”

Second year QB Davis Webb shares the same feelings the Engram felt about this event is a way for team to gain knowledge from past members and help raise money for a good cause. “This event is great for us to pick the brains of the guys who have been there as well as raise money for a great cause. I am proud to be here and I am looking forward to continue to enjoy the experience.”

When asked why he loves this event so much Webb was honest. ” I used to play in softball leagues in college so for me this is a great time and try not to have that inner kid show too much. I asked if he was a ringer ..”I wont go that far.”

The money raised for the Jay fund and raised over 30k for the second straight year. Tom Coughlin was able to make an appearance at this years game and was greeted with a standing ovation Coughlin now is a member of the jaguars front office.