It’s Pre-season, but the Lakers are Looking Rather Dangerous … 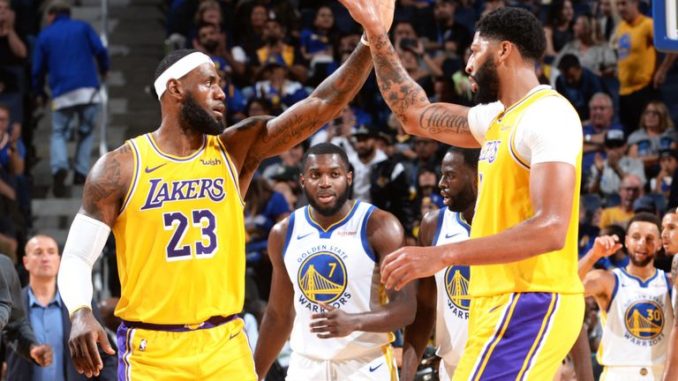 Could the Lakers displace the Warriors as the poster children of the Western Conference?

The fans of the Los Angeles Lakers are chomping at the bit like a pack of ravenous, rabid wolves.

First, they got Anthony Davis in a modified version of the trade that former New Orleans general manager Dell Demps refused to trigger last spring.

Now, they’ve gotten to see Davis in action for 18 minutes paired with LeBron James and suddenly the 2019-20 NBA Champion Lakers are going 82-0.

“I can’t see anyone in the league beating this team,” crowed one anonymous fan on social media this morning, hours after the Lakers snuffed the Golden State Warriors, 123-101.

While it’s doubtful the Lakers are going to replace the modern-era Warriors as the Western Conference poster child right away, they showed last night they are going to be a pretty dangerous team when the NBA season kicks off on October 22nd.

James and Davis combined for 37 points in their modest showing; Davis had 22, going nine-for-16, and King James hit for 15 on 50 percent shooting.

The impressive things were how well the team flowed in their first official game together, not just AD and LeBron; but how well they got others involved.

Gone is Kevin Durant, via free agency. Out is Klay Thompson, until at least the All-Star Break … maybe a tad longer.

Others have departed as well – DeMarcus Cousins tried to hitch a ride on the Lakers’ bandwagon, but got bit by karma, while Quinn Cook did in fact latch onto James’ coattails. Shaun Livingston and his bionic knee have retired, Andre Iguodala is in limbo elsewhere – just not in Memphis, and Jordan Bell will try and find his fortunes in Minnesota, a team Golden State faces this Thursday.

So you have a rebuilt cast of characters debuting in the brand new Chase Center last night.

Stephen Curry put up 18 in his 18 minutes, Jordan Poole chipped in 17 more, and Eric Paschall added 11. I know, I know, I know … it was like watching the Chicago Bulls in the Pete Myers era for me, and I’m sure I’m not alone.

After watching Curry and D’Angelo Russell hit three after three after three in a shooting practice drill, I was expecting a little bit more from Russell than four points. Maybe someone in the Golden State locker room has a recording of why he tanked so bad in his Warriors debut?

But it’s just Game One of the pre-season.

In the end, I think L.A. has a lot more in its tank than just James and Davis. I’ve said for the last few years that LeBron James’ legacy isn’t going to match Michael Jordan’s statistic for statistic, no more than Jordan did Bill Russell’s.

However, from a leadership standpoint, James’ legacy may be that he makes people around him better. He reaches the ears, hearts and minds of the youth, the next generation of cagers. He is an elder statesman, believe it or not.

Never mind that he’s building schools and keeping an open dialogue about societal happenings and leading urban youth to the proper mindset.

I think he stays in L.A. and that the Lakers finish in the Top Five in the West this year with at least 52 wins.

And dare I say it, they may just best that team across the Staples Center … again … barring injury.

Can the Celtics (Finally) Rise to the Top?
Chicago Bulls Finally Have Direction