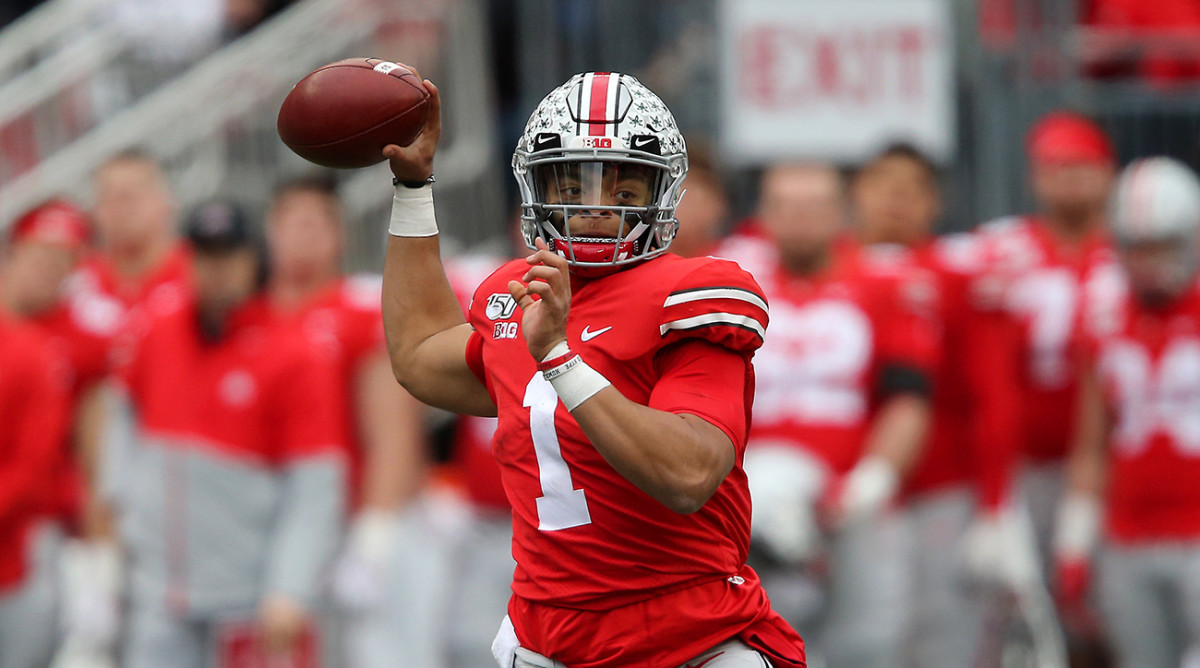 Justin Fields was one of the most highly touted prospects coming out of high school in Georgia along with Clemson’s Trevor Lawrence, where he posted 4,187 passing yards, 41 passing touchdowns, 2,096 rushing yards and 28 rushing touchdowns in 2 years starting for Harrison High School in Kennesaw, Georgia. A 5-star recruit and the top-rated dual-threat QB in the 2018 recruiting class, Fields committed to the University of Georgia in 2017.

Fields backed up incumbent starter Jake Frohm during his freshman season, and saw limited action. After a freshman season where he showed flashes of brilliance, totaling 4 touchdowns passing and 4 touchdowns rushing, he transferred to Ohio State where he would become the starter. In his first season as a starter, Fields led OSU to a win in the Big 10 Championship game against Wisconsin, along with a spot in the College Football Playoff. In the 2019 Fiesta Bowl, Fields struggled, throwing 2 interceptions and only 1 touchdown in a 29-23 loss against Clemson. Although the season finished with disappointment, Fields showcased his elite potential, throwing for 3,273 passing yards, 41 passing touchdowns, and only 3 interceptions in addition to 484 rushing yards and 10 rushing touchdowns.

In 2020, a COVID-shortened season, Fields showcased some inconsistency with his play but led Ohio State to an undefeated regular season along with a National Championship appearance. Fields was exceptional in the College Football playoff semifinal, throwing for 385 yards and 6 touchdowns in a performance The Ringer described as “one of greatest college football passing performances of all time.” Fields declared for the 2021 NFL Draft after finishing the shortened season (6 games) with 2,100 passing yards, 22 passing touchdowns, six interceptions, along with 383 rushing yards and five rushing touchdowns.

Pro Comparison: Dak Presscott/Russell Wilson. Fields combines the frame and overall strength of a Dak Presscott while combining the escapability and playmaking of the likes of Russell Wilson. Like Dak, he can break tackles and fight for yards through contact. Fields has the playmaking potential of a Russell Wilson as he excels at making off-schedule plays and throwing on the move. The ability to make off-schedule plays can cause him to hold the ball for too long at times though, as we’ve seen with Wilson.

Game to Watch: Ohio State vs. Clemson, Sugar Bowl 2020. Field displayed his full potential in this high stakes matchup versus Trevor Lawrence, finishing 22/28 with 385 yards passing and 6 touchdowns. He outplayed Lawrence and showcased his toughness after taking a hard hit to the midsection in the 1st half, but he managed to finish the game and lead his team to the National Championship.

The Man to Man Podcast Episode XII: Ex-NFL Cheerleader Jennifer Cobb & Team Gateway To A Cure
Why The Seahawks Should Keep Russell Wilson