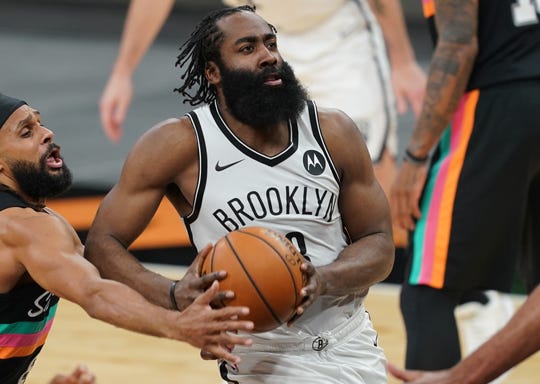 Sorry to be the bearer of bad news, but for the second game in a row the Nets might be without their big 3. Kyrie Irving is still out for personal reasons, Kevin Durant is still nursing his hamstring strain and now James Harden is listed as questionable for Friday’s matchup against the Detroit Pistons.

The MVP candidate has been dealing with neck soreness this week after a scary collision with Garrison Mathews this Sunday against the Washington Wizards.

Harden toughed it out on Tuesday vs. the Portland Trailblazers, scoring 25 points, dishing out 17 assists (tying his Nets career high) and grabbing seven rebounds.

On Wednesday though, vs. the Utah Jazz, he couldn’t fight through it so Head Coach Steve Nash didn’t play him.

In that game the Nets got blown out. They never led and were even down by as much as 38 points. They also struggled mightily from the floor, shooting 36.1% FG and 20% 3FG. Lastly, they only dished out 19 assists. The Nets haven’t gotten less than 20 assists since the first of the year in their 114-96 loss to the Atlanta Hawks.

So, needless to say the Nets need his contribution. Ever since he was traded to Brooklyn back in January, he’s only missed two games and has emerged as an MVP candidate ever since. Like any other MVP candidate would, he’s most likely going to try and play through this. However, Nash isn’t so sure that will happen on Friday.

“He’s pretty banged up,” said Nash. “We hope he can play, but that’s not a guarantee.”

Harden also spoke on the possibility of him sitting out.

“I think everybody knows I love to play. I don’t really rest. I love to hoop. I love to be out there and be there for my teammates,” said Harden. “I feel like if I’m on the court, my teammates have a better chance of winning. So that’s just my mindset.”

Did the Lakers Lose By Not Trading For Kyle Lowry?
So Long, Tony Bradley. Hello George Hill