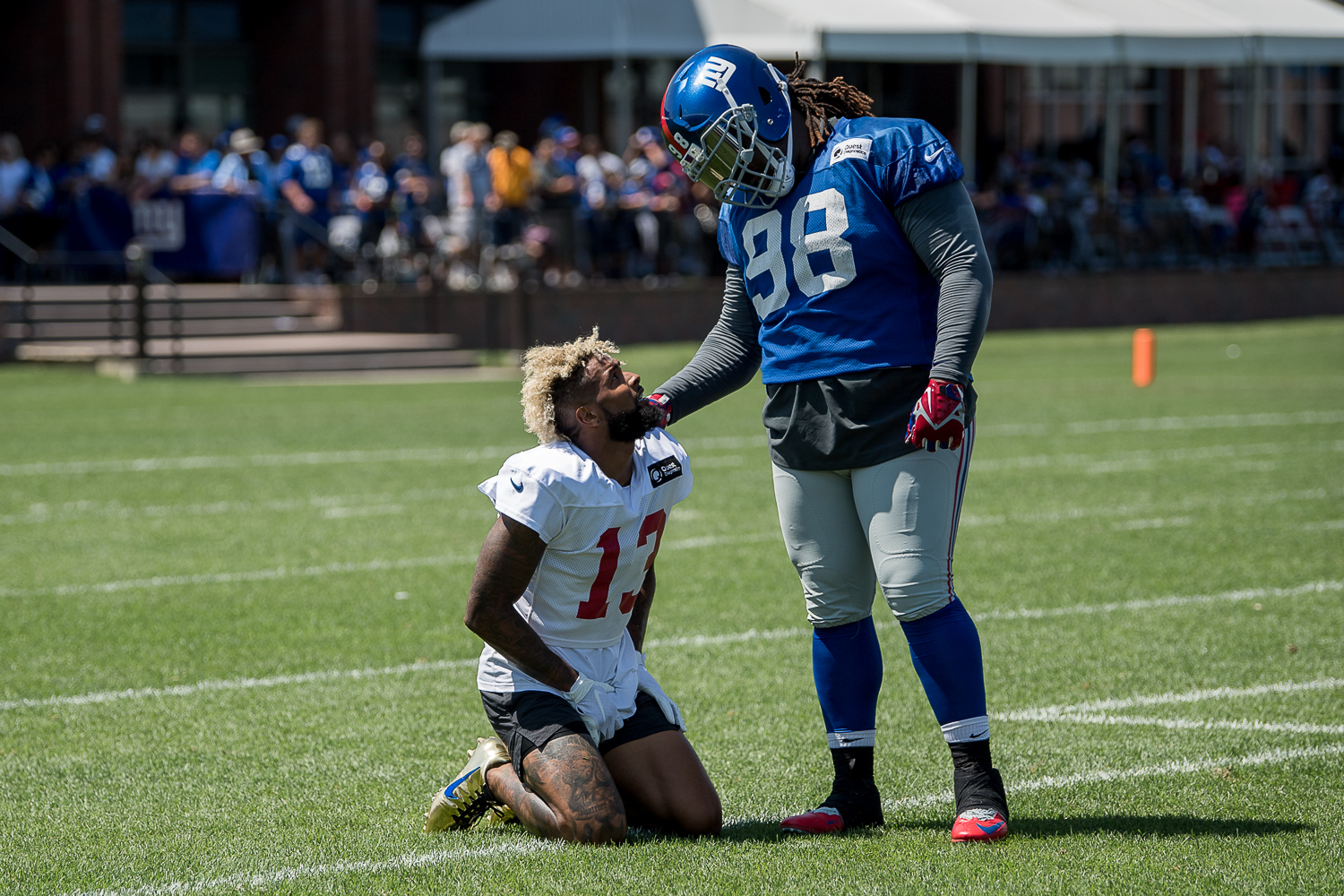 Odell Beckham has always had the reputation of being the center of attention or the eye of the storm. Friday was no different as he met with the media where reporters were given the opportunity to question Odell about the comments John Mara made earlier in the week.

Miss the Comments? Mara stated he wish he would make as much noise on the field with his play not with his mouth. Open flood gates of distractions here as the team which has struggled with a 1-5 record, the last thing this team needs is their focus to be anywhere but on football.

When asked about Mara’s comments he tried to take the high road, well sort of. ” I respect and value his opinion, obviously, so that’s what we’re going to do. Like I said, focus on Atlanta right now and that’s really it. I haven’t talked to him yet, but I’m sure we’ll talk. We talked, but we haven’t talked about that.”

One of the best questions that was asked during the session happen to be about how this has become a side show and not about football. Beckham broke it down and agreed that it is not about football right now. “It’s unfortunate. I think the extracurricular comes with losing. We know what it’s like when you’re losing, especially when you’re losing here, so we’re sure if you were winning, it’d be different, but it’s not the case, so right now it’s just about football, that’s it. Like I said, my focus is on football. I need to do more, I need to do better period. There’s nothing more that I could say about it.”

Beckham has grown up quite a bit during the last year. His injuries last season nearly took away his career and has spoken often about how grateful he is about being able top lay football and have the lifestyle he has. During his career he had moments where he is causing a distraction on the sidelines and gets labeled as being immature.

Odell does not really regret any of the sideshow acts that have gone on over time. ” I’ve said this all the time, never have any regrets. At one point in time, it was exactly what you wanted. It is what it is. I don’t believe in everything’s a test or anything like that. Everything’s an opportunity to learn and grow, that’s really it.”

When asked about maturing over the last year Beckham stated that he was trying to grow up. ” I feel like I’ve grown since last year, but there’s still times where I find myself in this situation, so only time can tell. Enough about talking, words, any of that. It’s all about action.”

Odell would not place any blame on one individual. Football has always been a team game and knows that it is a tall order to come back from the 1-5 start. Odell admitted that he is looking to stay positive and asked about being positive. “Glass half full. Going into the bye week, we got two games. You can get two big wins for this team and turn it around. We can go in it 3-5 and just like every other team, you make a run. That’s how I’m looking at it, knowing that this is the most important game of the season. Can’t worry about what our record is. Got to worry about this game, win this game, prepare for next week, win that game, go into the bye week, everybody gets some legs back, get some time off, clear your mind and come back and make a push. ”

Knowing how strong the Falcons defense is, Odell took a few moments to break down the falcons defense. “I think they’re a team who would expect to have a better record than they do, but they’re still a dangerous team and I know a couple of guys went down and stuff like that, so we just try to find the weaknesses just like every other week and attack them, but they got two good corners. They got a good front. It’s a good team. They got a nice little middle linebacker who I’m looking forward to seeing, but we just got to take advantage of these opportunities.”

Time will tell on if Beckham will try to work out the issues with John Mara, and help become a leader for the Giants or will he be a headache which will force him to be moved or cut.

Either way the Giants have enough issues on the field and the distraction that this is causing is not needed. Headlines about being fined for his comments in a magazine puts his teammates and his team in a tough spot. Odell did get fined for his previous comments.  “It is what it is, you just got to take it on the chin. It is what it is.”

All of our questions could be answered on Monday in Atlanta, or open up for more questions.

Giants Look For Redemption Against The Falcons
Giants-Falcons Game Preview