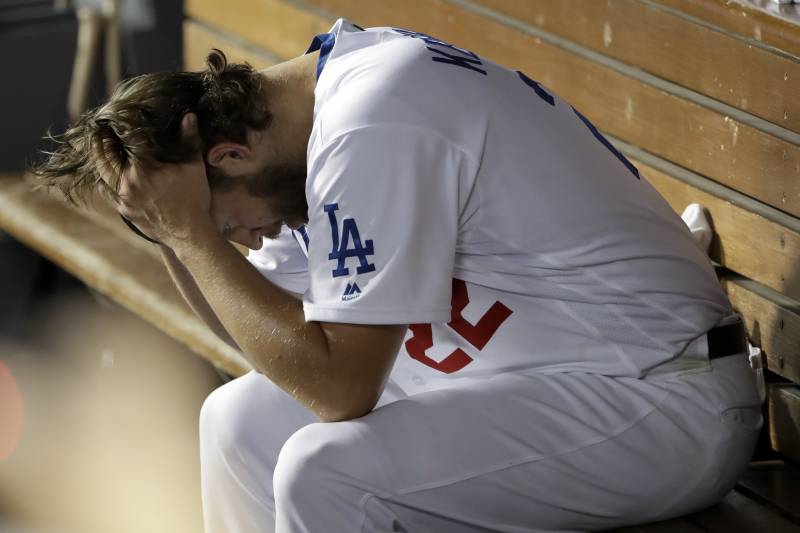 The Dodgers’ 106-win season came to an early conclusion with Wednesday night’s 7-3 loss to the Nationals in Game 5 of the NLDS. Los Angeles held a 3-1 lead in the top of the 7th when Clayton Kershaw entered the game with two outs and runners on first and second. Kershaw delivered a clutch sequence, striking out Adam Eaton on three pitches. The Dodgers left-hander’s struggles in the postseason have been well documented, but he appeared poised to put that behind him and will his team to a series victory. That is, until he returned to the mound to face the Nationals in the top of the 8th. With just 3 pitches, Kershaw surrendered back-to- back home runs to Anthony Rendon and Juan Soto. In the blink of an eye, Washington had tied the game and Kershaw was chased to the dugout to the tune of boos from Dodgers fans.

Joe Kelly ended up surrendering the game winning grand slam to Washington’s Howie Kendrick in the top half of the 10th inning, however the blame had already been placed squarely on the shoulders of Kershaw. The narrative of Kershaw being a postseason choke artist has been years in the making, and Wednesday’s blowup simply added fuel to a fire that has already significantly tainted the legacy of one of the greatest pitchers of this generation. Nobody was more upset than the Dodgers ace himself. The devastation was evident on the face of the pitcher, as he sat alone on the bench staring in disbelief at the ground below.

After the game, Kershaw said “Everything people say is true right now about the postseason.”

Unfortunately, the numbers concur. In the regular season, Kershaw is one of the very greatest pitchers of all time. He owns a career ERA of 2.44, 3 CY Youngs, an MVP award, 8 All Star appearances across 12 seasons, and a record of 169-74. In the postseason, his career ERA is 4.43, and his record is 9-11. All postseason appearances are high leverage situations, but when the stakes have risen further, his ERA has followed suit. Kershaw’s 6.06 ERA as a starter in elimination games is the single worst mark in MLB history. His 10 home runs allowed in elimination games is also the highest of all time.

Baseball, to a greater degree than most other sports, is a psychological game. For whatever reason, Kershaw has failed, time and time again, to perform when the games matter most. One would think that a player with the composure and consistency to be the best pitcher in baseball for years on end would be able to translate his success to the postseason. This has simply not been the case for Kershaw. Witnessing such a talented and passionate player repeatedly fall short of accomplishing the ultimate goal in the sport is nothing short of heartbreaking.

While the curtains may have closed on this season for the Dodgers, the good news is that the team looks to be competitive for the foreseeable future. Kershaw remains under contract for two more seasons and will likely have more chances at redemption. He will only be 32 next year, and many great pitchers remain elite well into their late 30s. Fans of the Dodgers, and all baseball fans alike, will be rooting for the southpaw to flip the script on the narrative that has emerged. Kershaw has likely already secured his spot in the Hall of Fame; however, his legacy may never be fully appreciated if he is unable to rise to the occasion of pitching in October.

Note: Stats for this article were provided by ESPN Stats & Info and Baseball Reference.

Yankee Updates Before the ALDS
Bold Move by Cubs: David Ross to be Named Manager