The Nets Are In Trouble 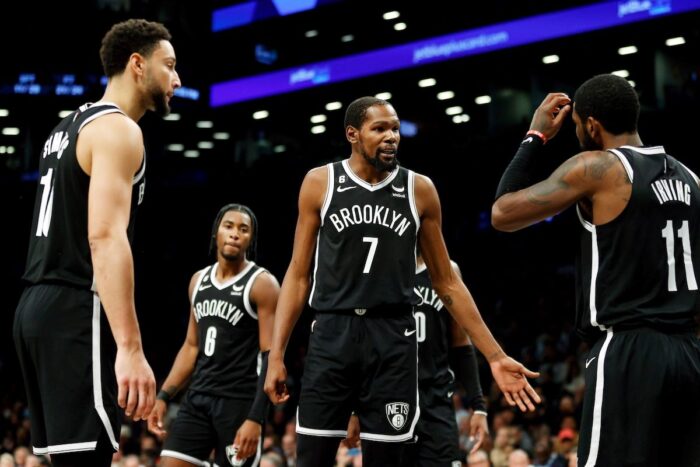 The Brooklyn Nets have been an absolute disaster. They are currently 2-6 after getting blown out by the Chicago Bulls last night and are 12th in the Eastern Conference. With the names of Kevin Durant, Kyrie Irving, and Ben Simmons on the roster, expectations are high this season. It’s still early, but this isn’t a good sign.

The first cause for concern is head coach Steve Nash. Following the Nets second win against the Indiana Pacers, General Manager Sean Marks announced that the Brooklyn Nets have parted ways with the former MVP. Nash took the coaching job on November 2020 in hopes of bringing a title to Brooklyn. With All-Stars Kyrie Irving, Kevin Durant, and James Harden, he failed bringing this team a ring, let alone make an appearance at the Eastern Conference Finals.

His relationship with the roster has also been topsy turvy, as Harden is no longer on the team. Even Durant saw the writing on the wall this past offseason, but decided to stay on the team after trade negotiations faltered. It may have been a mistake.

Next is Ben Simmons. In 32 minutes, Simmons is averaging 6.2 points, 6.5 rebounds, and 7.3 assists. His defense has only been the main source of productivity. However, his lack of offense has continued to worsen following his return to the NBA after back surgery. Adding insult to injury, the feud he had with his former team, the Philadelphia 76ers, appears to have diminished his confidence on the court.  Even at the young age of 26, its unclear whether he will be back in his “vintage” form.

Acquiring Simmons from the Sixers has backfired so far this season. Following the loss against the Bulls last night, trade talks have emerged around the 2016 No. 1 overall pick. The Brooklyn Nets may need to move Simmons should things get work in order to salvage this awful start.

The Brooklyn Nets defense is atrocious this season. They are dead last in the league on defense rating. Their offense isn’t holding up either as they aren’t even in the top fifteen.

On the roster, there seems to be no drive or identity on the team. Both Kyrie and Durant have also been awful on the court together, and their supporting cast isn’t much better. The Nets are suffering from a lack in both wing speed and size on the post. They can’t sign valuable role players because their “Big” three take up most of the teams salary, totaling at least $115M this season.

Once again, the talented point guard finds himself in another controversy off the court. In the past, Irving abruptly took time off from the team in the 2020-2021 season. The following year, he refused to get vaccinated. What now? This time, it’s his questionable support for antisemitic posts online. Irving tweeted a link to the 2018 movie “Hebrews to Negroes: Wake Up Black America,” showing praise for it’s antisemitic themes. This includes those promoted by dangerous sects of the Black Hebrew Israelites movement.

TNT’s Inside the NBA and former player Charles Barkley chimed in on Kyrie’s actions, claiming the league “dropped the ball” on the All-Star guard. Antisemitic remarks have caused the NBA teams to punish players in the past. Meyers Leonard, a former player, was released from the Miami Heat after news came out that Leonard used an offensive Jewish slur while livestreaming the popular video game “Warzone.”

In regards to Kyrie Irving, the Brooklyn Nets and the NBA have released a statement condemning hate speech, calling it “unacceptable” and “counter to the NBA’s values of equality, inclusion and respect.” Notice how both organizations do not mention Kyrie Irving by name.

It’s interesting to see Meyers Leonard receiving an automatic release from his team following his antisemitic remark and is no longer in the league. On the other hand, Kyrie is still on the Brooklyn Nets, and there’s been no decision to punish him.

Right after GM Sean Marks fired Steve Nash, reports surfaced that Ime Udoka will replace Nash as Brooklyn’s new head coach. Last season, Udoka took the Boston Celtics to the NBA Finals but fell to the Golden State Warriors in six games. With his intention to improve the team in the offseason, Udoka was suddenly let go from the Celtics organization due to consensual relationship with one of his subordinates that was deemed inappropriate. He received a one year suspension from coaching the team and has no intention of returning to Boston after it ends.

Udoka’s signing with Brooklyn is Marks’ response to improve the Nets on and off the court issues. On paper, this is a good move. However, this sparks concerns for Udoka, given his history. Will his coaching put Brooklyn back on track? Or will it be another nail in this nightmarish coffin?

Isaiah Hartenstein: One of the League’s Most Underrated Signings
CP’s Weekly Top 25 Week 10