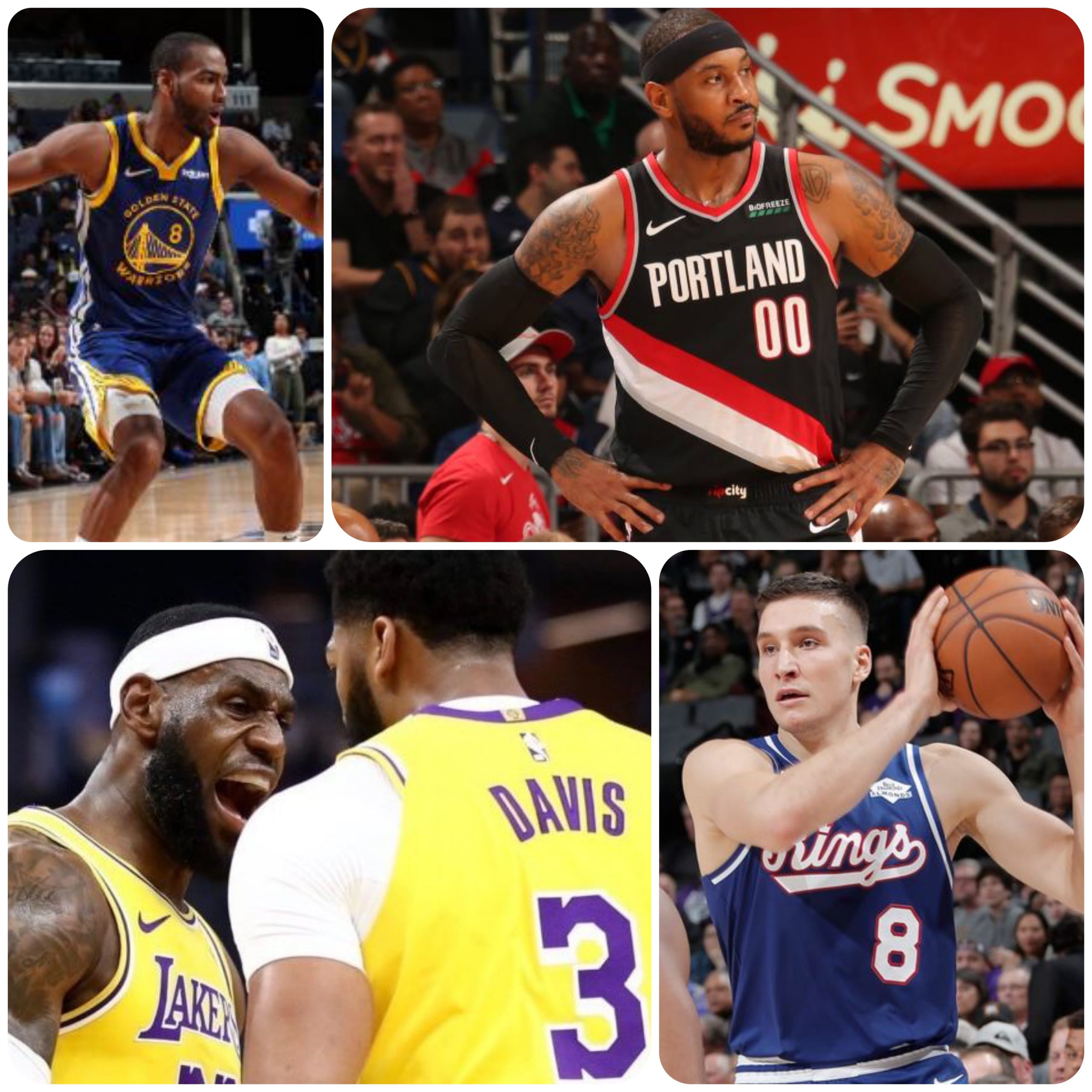 Carmelo Anthony's debut - success or failure? The Lakers ride Anthony Davis to a win, the Warriors do the same with Alec Burks and the Kings with Bogdan Bogdanovic last night.

The Return of #007
The much ballyhooed return of Carmelo Anthony to the NBA after being out a year fell flatter than a dead fish and smelled just as bad last night in The Big Easy. Melo’s workout videos on social media teased with so much promise and his first points as a Portland Trailblazer, a three for the Blazers’ first points of the night last night, were a sign that those workouts weren’t a fluke.

But later in the second quarter, as Melo attempted to slash in from the right for what looked to be a two handed dunk, he was met by a much younger, much sprier Jaxson Hayes, who stuffed any thought of whatever Anthony had played out in his mind seconds earlier, and he wasn’t the only one … but, that seemed to be the catalyst for the poor shooting the remainder of the night.

Carmelo Anthony had been out of the NBA for 53.5 weeks, and hadn’t played competitively but four games in that short-lived stint, scoring in single digits in six of those 10 games. His 10 game tenure with the Houston Rockets in the 2018-19 season didn’t include much playing time, and only produced a stat line of 13.4 points, 5.4 rebounds and 0.5 assists before he was subsequently dismissed from the team. Anthony never got the chance to establish any synchronicity with Chris Paul, Clint Capela and James Harden, and that was his own fault.

But he did look like a player who struggled on both ends of the floor last night every bit as much as he did the last two seasons with Houston and Oklahoma City.

Will we ever get the Carmelo Anthony back that was an unselfish, but dominant All-Star under head coach George Karl in Denver? Sadly, no. That all changed in 2011. We have a better chance of watching Dwight Howard resurrect the Orlando Magic Dwight Howard.

However, the burden of expectation from Carmelo Anthony should be gone. We’ve learned to live with disappointment when it comes to Melo.

And maybe that’s just what he needs to turn himself about and surprise us, to evolve with today’s game to give himself a shot at a championship before he hangs up his Jordans. After all, many others in the 2003 NBA Draft class have championship rings – including Darko Milicic and Zaza Pachulia. That should be impetus enough right there. Let’s go #007.

New Orleans, Louisiana – The New Orleans Pelicans spoiled the debut of Carmelo Anthony by bringing back one of their own, Brandon Ingram, after missing four games with right knee soreness. The Pelicans dove the waters of the NBA schedule and came up with their fifth win of the season, to push the Blazers a half game below them in the basement of the Western Conference. Jrue Holiday was stellar in his play last night, scoring 22 points and 10 assists to lead the Pelicans. Ingram returned to add 21 points, seven rebounds and five assists. J.J. Redick shot 50 percent to net 18 points, Nicolo Melli had 14 and six, and E’Twaun Moore hit for 11 on the night. The Pelicans have won two straight and three of four.

Portland was led by C.J. McCollum, who matched Holiday’s 22 points, but on much worse shooting. Hassan Whiteside chipped in 14 points and had 14 rebounds, Anfernee Simons started in place of Damian Lillard (sore back) and had 13, Nassir Little double doubled with 12 and 11, while Kent Bazemore had 11 points, and Anthony finished with 10 points in his debut.

Memphis, Tennessee – The Golden State Warriors shot 47 percent on the road last night in Memphis, and utilized a 33-16 second quarter to pull away from the Memphis Grizzlies, and a 31-23 fourth quarter to seal the deal on their third win of the season, halting a seven game losing streak in the process. Alec Burks led the effort with 29 points, eight rebounds and two assists. Glenn Robinson III – the only player to have started all 15 games this season – added 20, and Marquese Chriss and Eric Paschall each chipped in 17 points. Draymond Green finished with a near triple double with eight points, 10 rebounds and 10 assists in the win. The Warriors had a commanding 61-46 halftime lead.

Memphis was led by Ja Morant’s 20 points and six assists. Dillon Brooks shot 41.2 percent to get to 18 and three, Brandon Clarke came off the bench for 17 and five, and Jae Crowder hit for 15 points and 11 rebounds.

NEXT UP
Warriors at Mavericks – Tonight
Lakers at Grizzlies – Saturday

Sacramento, California – In what was expected to be an old west style shootout, the Phoenix Suns were outgunned by someone who didn’t even know about old west style shootouts until he came to the States to play NBA basketball. Bogdan Bogdanovic grew up in Belgrade, Serbia and didn’t get the opportunity to play at a storied basketball university like Devin Booker did at Kentucky. Instead, he honed his craft with Euroleague teams like Partizan and Fenerbahçe.

Last night, that Euroleague experience shone bright as Bogdanovic led the Sacramento Kings to their sixth win of the season and just a game behind Phoenix in the Western Conference chase. Bogdanovic finished with a game high – career high – 31 points, four rebounds, seven assists and three steals. He also set a career high with seven three pointers in this game. Richaun Holmes added 20 and 15, Nemanja Bjelica had 17 and eight, Harrison Barnes chipped in 15, and Buddy Hield ended with 12 points, five rebounds and four assists.

Phoenix, who started the season much better than they’ve played their last five games (lost three of them), struggled to muster 42 percent shooting in Sacramento, only hitting 33 percent from beyond the arc. Devin Booker shot 10 of 20 to net his 30 point night; he also had five rebounds, eight assists and two steals. Kelly Oubre, Jr. and Mikal Bridges dropped 20 points apiece in their efforts, Cam Johnson hit for 18, and Frank Kaminsky had 17 points and four rebounds in the loss. Ricky Rubio had one point and two assists. The Suns had beaten the Kings back on Opening Night, 124-95.

NEXT UP
Pelicans at Suns – Thursday
Kings at Nets – Friday

Los Angeles, California – I don’t think anyone thought the Oklahoma City Thunder was going to waltz into the Staples Center and beat the league-leading Los Angeles Lakers. To wit, I don’t think it’s going to happen back in Oklahoma City this Friday night, either, with both teams having equal nights of rest. So chalk it up that the Lakers are 13-2 going into the weekend?

I don’t know, the Thunder played the Lakers a lot tougher than I expected, though the outcome was as predictable as sunshine and traffic in L.A., or as predictable as a LeBron James triple double. Dennis Schroder led Oklahoma City off the bench with a season high 31 points, on 60 percent shooting. Danilo Gallinari finds the rims at the Staples Center still kind to him as he scored 25, Shai Gilgeous-Alexander had 16, and Nerlens Noel finished with 15 points and eight rebounds.

But it was too much Anthony Davis, who led all scorers with 34 points, adding seven rebounds, four assists, four steals and two blocked shots in the Lakers 12th win of the season. James’ triple double included 25 points, 11 rebounds (all on the defensive glass) and 10 assists. Kentavious Caldwell-Pope added 13, while Rajon Rondo finished the night with eight points and 10 assists, to tie James in distribution. James has now scored a triple double on every team in the NBA over his 17 year career; he has five over his last 10 games.

NEXT UP
Lakers at Thunder – Friday