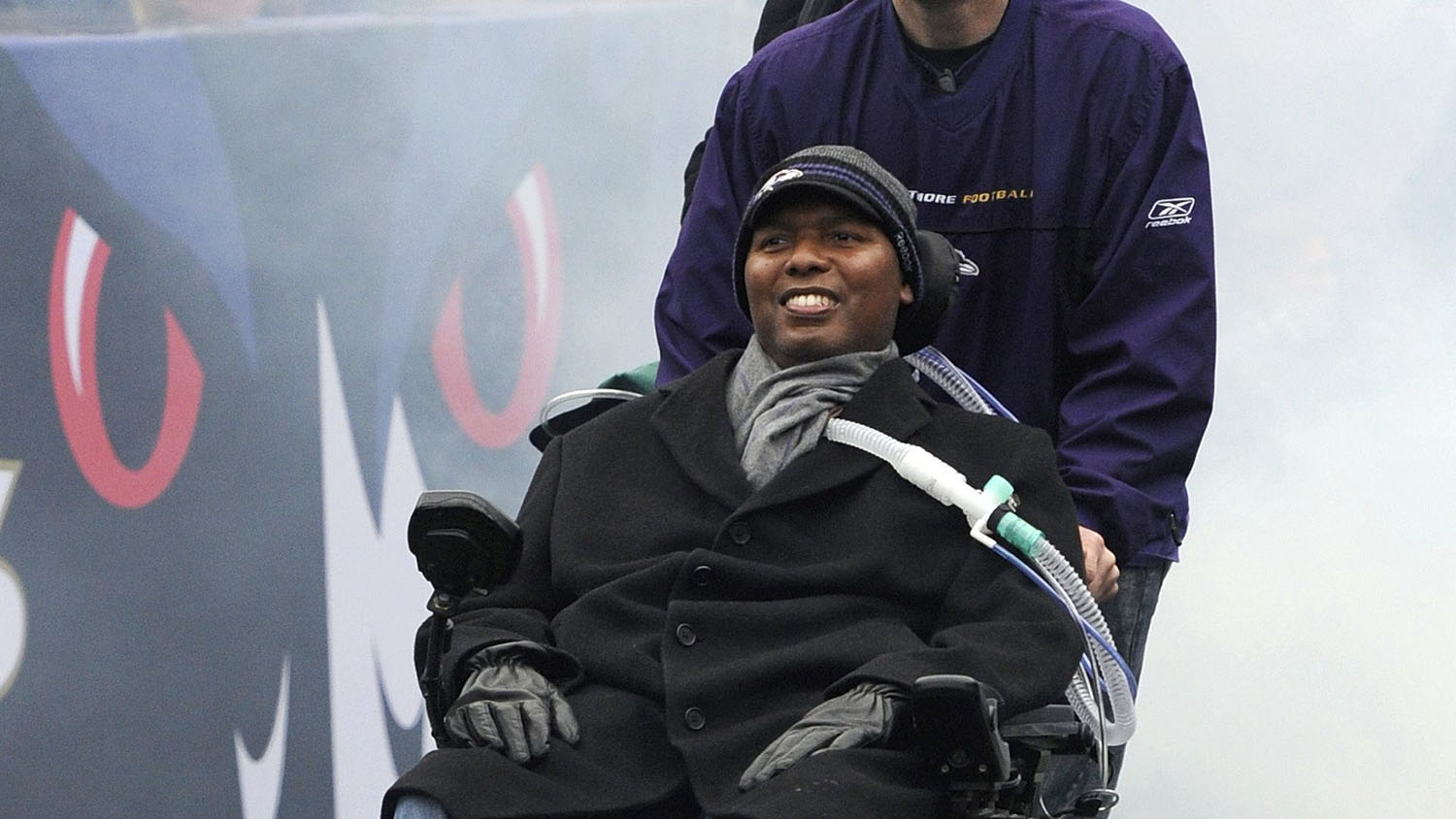 What do you say about a man who changes your perception on life just by living his own?

As an avid Baltimore Ravens fan, I have the utmost respect for O.J. Brigance and was honored with the opportunity  to interview him.

Not only is this one of O.J.’s favorite quotes, but it describes him to a T.Despite being unable to tackle his current opponent ,Amyotrophic lateral sclerosis,“ALS” is hardly the first obstacle that he has had to overcome.

For those of you who don’t know much about the man, – Orenthial James “OJ” Brigance is a former pro football player originally from Houston, Texas.  He attended Rice University,  just 10 miles from where he grew up. In 1991  he was drafted by the British Columbia Lions of the Canadian Football League. Although playing in the CFL wasn’t exactly O.J.’s  dream, he was raised to make the best out of every opportunity.

Despite his impressive college and CFL career, the NFL was not interested in O.J. at that point.  In 1994, he was signed to the CFL franchise in Baltimore, where he would win a Grey Cup.    After 5 years in the CFL, O.J. would enter the NFL as a Miami Dolphin.  In 2000, he joined the Baltimore Ravens and won his first Super Bowl.  This victory made Brigance the  only player in football  history to  win both a CFL and an NFL Championship for the same city.

“In 1995, when it was announced that the Browns would be moving to Baltimore, I got a call to work out for them after spending the previous two seasons in Baltimore with the Stallions of the CFL.  My vision had me signing with the expansion Ravens and living happily ever after,” O.J. said. “God’s vision trumped my vision and sent me down to Miami for four seasons before bringing me back to Baltimore to win my first Super Bowl.”

After retiring in 2002,  O.J. would eventually rejoin the Ravens as the Director of Player Development.   In 2007, he was 37 years old, happily married and in good health, when the  shocking news arrived.   O.J. was diagnosed with ALS, better known as Lou Gehrig’s Disease.

ALS is a progressive neurodegenerative disease that attacks the motor neurons in the brain and the spinal cord, affecting muscle function.  It starts out with slight numbness of the muscles and progresses into an inability to control movement and problems with speaking, swallowing, and breathing.  ALS occurs rarely and spontaneously.  They have yet to find a definitive cause or cure.

Today, one of O.J.’s  greatest goals is to further develop the Brigance Brigade, the foundation he created in order to equip, encourage and empower others who are living with ALS.  Although the ultimate goal is to live in a world without ALS, , currently the foundation strives to support those who suffer from ALS in all capacities;  financially, emotionally and physically.

“Our goal with the Brigance Brigade this year is to grow our signature event, the 5.7K, to be able to help more PALS [People with ALS] live a better quality of life.  Our most frequent request is fast-becoming assistance with respite care.  To have in-home care can cost tens and thousands of dollars.  We have to do better so we can give more,” Brigance explained.

In April, the Annual 5.7K was a huge success with over 1,000 participants and their families present raising over $110,000.  O.J. and his wife Chanda were in attendance along with several other professional athletes.

In addition to his foundation work, O.J. continues to work for the Baltimore Ravens as the Senior Advisor of Player Development. He offers new players guidance and support in transitioning to their new roles and acts as  a motivator and a leader in the locker room.  Despite no longer being able to use his own voice, O.J.’s powerful words are still heard through the use of an augmentative communication device in order to rally his “Mighty Men”.

“This is one of the hardest parts of living with ALS.  Though I may not look the same on the outside, I am still the very same person I’ve always been.  I’m still fully capable of seeing, thinking, smelling, and hearing like I used to.  I am as sharp as ever, and yet people – loved ones included – often struggle to see me as such.  They view me differently,  like a lesser version of my true self.” –Strength of a Champion.

By the end of the first chapter, you come to realize what an enormous role God plays in both O.J.’s and Chanda’s life together. Their religion is clearly the glue that helps them stay strong when life throws them hardships.

“Throughout my numerous trials and tribulations, I can’t say that I have ever questioned God’s motivation for what He allowed to happen in my life.  If anything, it made me wonder what the purpose for the event was.  So having this ingrained in my spirit causes me to look past adverse circumstances to their hopeful purpose and greater good,” O.J. explained.

As far as  his job with the Baltimore Ravens, O.J. loves every minute.  His advisory role allows  him the perfect opportunity to make a difference while still being involved in the world  he knows best in the city that he loves.

“I would describe the Ravens’ fan base as loyal and fanatical.  They bleed purple… There is a championship mentality here in Baltimore.”

In his book, O.J. talks about his strong bond with Ray Lewis, and even asked him to write the forward for Strength of a Champion.

“O.J. is my greatest inspiration.  He is my hero.  He is the embodiment of the complete man,” Lewis wrote.  “Ask any individual within the Ravens organization who their role model is and they’ll all respond with one name and one name only: Juice.”

In regards to the team, he has high hopes for the players as well as the organization.  “[Last year] We weren’t able to make the playoffs because we didn’t win enough of the close games and battles injuries.  The teams in the NFL are so close talent-wise.  The team that is able to overcome a few bumps in the road and still win, get into the tournament.  If you can just get in, anything is possible,” Brigance stated simply.

In regards to his best friend, Brigance said, “Ray Lewis was an exceptional motivator for our team during his time with us.  He left deposits in Joe Flacco, Terrell Suggs, Haloti Ngata, Torrey Smith and Ray Rice. These are the men we will lean on to provide leadership.”

O.J. was fortunate enough to be present for the Super Bowl  in 2013 when the Ravens would stun the 49ers. When the clock ran out and the victorious Ravens took to the field, confetti raining down – it was a moment he wanted to freeze in time, and almost missed completely due to an unexpected trip to the hospital just days earlier..

Despite ALS, O.J. had been relatively healthy up until this point.  Right before the Super Bowl, he was diagnosed with diabetes, but to no one’s surprise, this disease has failed to slow him down..  Now his daily routine includes the occasional finger prick.  Regarding ALS, the latter stages have progressed much slower than in the initial stages and has already proven to be no match to his inner strength.

“I likely had just two to five years left to live.  There was a chance I wouldn’t see my fortieth birthday,” OJ wrote in Strength of a Champion.  Only fifty-percent of those diagnosed with ALS live three years, and only twenty-percent reach five years.  O.J. never once took the news of his diagnosis as a death sentence, and has continued to look upward and outward while celebrating a total of six birthdays since his diagnosis.

“I do wish I had been more balanced in my pursuit of certain goals.  Hindsight is always 20/20, but the comfort I have is that those life lessons have made me a better and stronger man.”

As for his bucket list, he has already crossed one item off of the list with writing Strength of a Champion.  Next on his list is an African safari.

“I will get to all of them eventually,” he said.

Beyond the Athlete: Eagles TE Brent Celek
Chris Jericho Breaks Down the Walls With BSP!!!