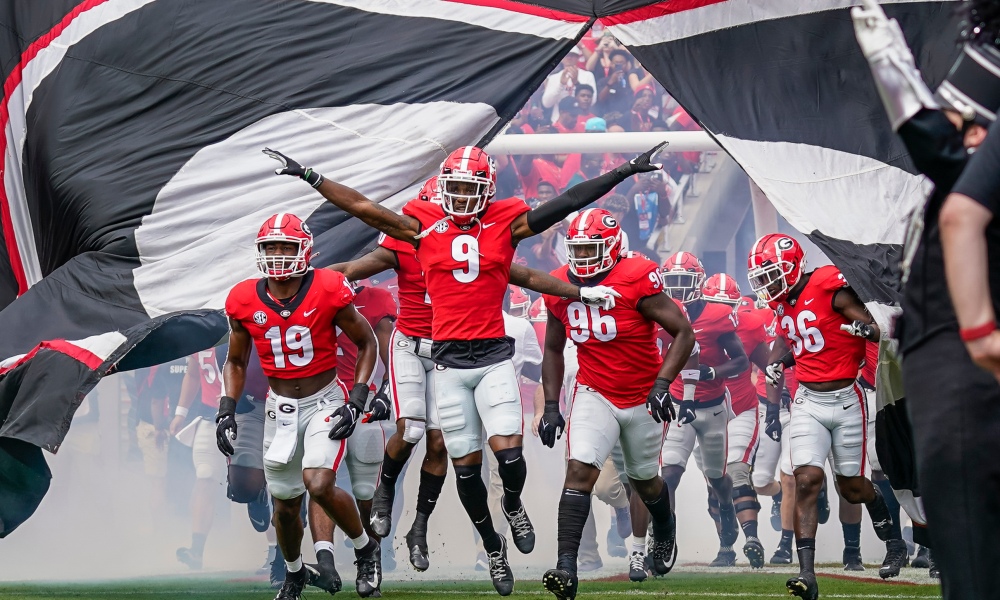 Mondays are for rankings! By the time America went to bed on Saturday night, we knew some major changes were coming in the AP Poll. Now, I have the dreaded task of ranking the teams myself. No use in wasting time, so let’s get started.

After wrestling with this decision since their win over Clemson, I can finally rank Georgia No. 1 with a clear conscience. A 34-10 win over Auburn wasn’t quite as dominant as we expected, but after a unnamed No. 1 team fell from grace Saturday night, Georgia sits on the throne going into week 7.

Who would have guessed the Iowa offense would step up and save their undefeated record? I certainly didn’t, but that’s exactly what happened in Iowa City after the Hawkeyes trailed 17-3 to Penn State. Even after beating a top five opponent, they won’t surpass Georgia, and I don’t see it happening anytime soon considering the gap between the two teams.

Ohio State makes a big jump after a definitive win over the Terps. For all intents and purposes, this isn’t the same Buckeye team that gave Oregon their season-defining win. If Ohio State keeps playing the way they have in the weeks since the loss, we’ll see the Buckeyes make the playoffs for the third consecutive year.

Even after getting jumped by Ohio State, Cincinnati moves up in this weeks rankings after not playing a game. It’s not always that easy, but major changes in the top five paved the way for Cincinnati to move into a playoff spot for now.

Despite their lack of a defining win thus far in the season, Penn State stays in my top five. Why? I’m not going to punish a team for losing on the road to the No. 2 team in the nation by a field goal after the starting quarterback goes down. Luckily, this bye week is exactly what the doctor ordered. If Sean Clifford is able to return afterwards, Penn State can hold this spot. If he isn’t, I see several more rankings drops in the Nittany Lions future.

Next Week: At Mississippi State

After we picked our jaws up off the floor sometime Sunday morning, we had to evaluate what this loss meant for Alabama. Although I had A&M ranked going into last Saturday, the Tide should have put the game away long before it got to the point that it did. Bama, you forgot what we like to say here at Back Sports Page, take care of business. Alabama stops the drop at number six because they have two of the better wins this season over Ole Miss and Florida, but another showing like this and Bama exits the top ten.

Next Week: At Indiana

The Spartans made a ridiculous amount of moves in the transfer portal over the summer. Those moves bolstered this roster in a way that can’t be overstated. For Michigan State, the proof is in the pudding as they move to a 6-0 record as they head to Indiana in a game that should prove more competitive than you might think. If they survive that one, the Spartans will reach an even higher pedigree on the 2021 season.

No game means no change for the Ducks. I was open to having to move them considering the amount of shifts happening around them, but Oregon conveniently lands right where they did last week.

Next Week: At Georgia

For the first time since 1950, the Wildcats start their season 6-0. Transfer quarterback Will Levis and standout gadget Wandale Robinson, alongside one of the better defenses in football, give Kentucky fans plenty to be optimistic about this year. They look to take on the No. 1 Bulldogs this weekend and stun the nation. Will they? It’s not likely, but was Texas A&M’s win over Alabama likely? Stay sharp, it’s a wild season we’ve been watching.

Next Week: At Tennessee

An ugly win for the Rebels, the only reason this game didn’t go to overtime was thanks to an incredibly bold move by Arkansas head coach Sam Pittman that didn’t pay off. Still, readers of these rankings now how highly I think of Arkansas this year, and a win is still a win. Beat a top fifteen team, and you’ll move up in these rankings. That’s what Ole Miss did, and here they are.

Oklahoma is allowed in my top ten as soon as they play four good quarters of football on the same Saturday.

For the second week in a row I’m putting notes on teams outside the top ten, but this one needed some explaining. Nebraska isn’t a bad team, and I’m not punishing the Wolverines for only winning by a field goal. However, they drop this week in the rankings due solely to the outstanding performance of the teams ranked around them. If Michigan can get a win as significant as the teams around them have, they’ll move right back up in the rankings.

Next Week: At Texas

Next Week: At LSU

Next Week: At Army

Next Week: At Missouri

Next Week: At Utah

Next Week: At Appalachian State

Next Week: At Arkansas

Next Week: At Baylor

The most I’ve ever dropped a school, BYU showed they have a long ways to go before being taken seriously in the college football picture. After dropping a game to an unimpressive G5, BYU just barely hangs on to a ranking. If BYU looks good next week and upsets the Bears, expect a big correction in their ranking. If that doesn’t happen and the turn the ball over four times (again), the Cougars lose the number next to their name.

Well, the man who’s power rankings you just read, is in first place in our weekly College Football Pick Em’ contest. Matt Sargent had another great weekend going 4-0-1. He had the Michigan vs Nebraska spread at -3, so he still got a push. As for me and Matt Jakubosky, well we also finished over .500 going 3-2. This coming week’s college football slate isn’t the best, but football is football, and we love it!