Baseball in July: There’s No Crying

Everyone knows the old saying “there’s no crying in baseball,” but there may have been a tear or two shed during the New Hampshire Fisher Cats game against the Reading Fightin’ Phils on July 24. 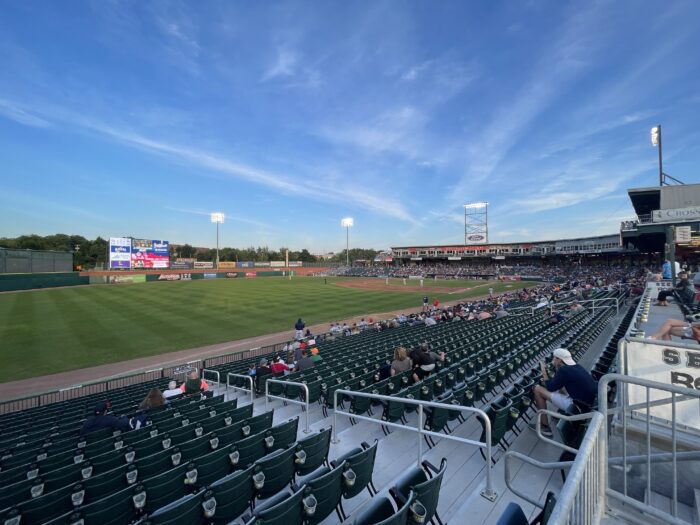 The game started out promisingly enough, with starting pitcher Luis Quinones knocking the Fightin’ Phils batters off in quick succession during the first three innings. In the fourth, though, it all fell apart for the Fisher Cats.

The first three batters up singled. Then Quinones walked in three runs before the coaches replaced him with Mike Ellenbest, who promptly walked in another one. A double from Josh Stephen put Reading up six to none, and that’s how the score stayed for the remainder of the game.

So, all-in-all, not a triumphant night for New Hampshire. But go back just 48 hours, in the Fisher Cats first game of the series against the same AA Philadelphia Phillies affiliate, and the innings tell a different story. That scenario initially looked somewhat similar to July 24—going into the bottom of the ninth, New Hampshire trailed 6-3. That night, however, the Fisher Cats stunned Reading. After several plays that evened the score 6-6, Kevin Vicuna singled with the bases loaded for a walk-off.

It’s possible to cry happy tears too, after all. Because baseball is a game full of both heartbreaks and miracles.

In the stands on a Saturday night at Northeast Delta Dental Stadium, located in Manchester near the Merrimack River, the fans have experienced both. Although the Fisher Cats are the AA affiliate of the Toronto Blue Jays, when it comes to the big leagues, the crowd leans heavily toward the Red Sox. The Massachusetts border sits than an hour away, after all, and no Boston baseball supporter is unfamiliar with gut-wrenching loses—or, as of 2004, historic victories.

Toronto fans too know the taste of the victory—they’ve won two World Series since their first game in 1977. But they are also familiar with the sting of defeat, given the last World Series they won happened in 1993.

Regardless, the Fisher Cats hold a special place in the hearts of New Hampshire fans. They are, after all, one of only two professional teams that play in the state, and the only professional baseball team. Plus, they’re good. The Fisher Cats won the Eastern League title as recently as 2018, and they’ve groomed MLB stars like Vlad Guerrero Jr. and Bo Bichette. 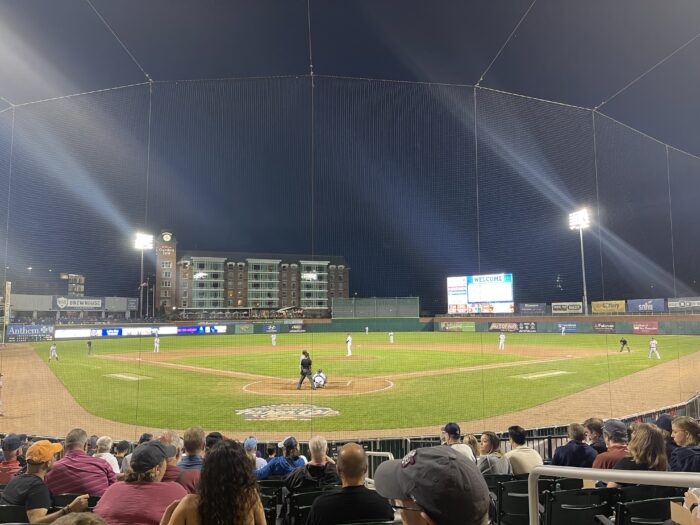 The highs and lows of baseball, though, reach far beyond the diamond. There was Lou Gehrig’s famous speech and tragic death. Josh Hamilton’s past and current struggles with addiction and abuse. Roberto Clemente’s death in a plane crash. Jose Fernandez’s fatal boat accident. And hundreds of other tragedies, both for players and for the millions of fans who show up to ball parks across the country every year. Just tonight, for example, sitting in the stands behind home plate, I received word that a friend of mine unexpectedly lost her sibling this afternoon.

Of course, people wouldn’t hope—not for baseball and not for life—if both the game and the world didn’t consistently prove hope was worth having. For instance, when the Cubs won the World Series in 2016, it prompted one of the largest gatherings in human history. Somewhere around 5 million people showed up to celebrate. Former Red Sox player Jon Lester overcame cancer his rookie year, and eventually went on to help Boston win the World Series in 2007. Legendary Dodgers pitcher Sandy Koufax struggled through excruciating arthritis, at the age of 29, to help his team win the 1965 world series.

The big victories matter. But the small ones do too. On July 24, for example, a small bespectacled boy sitting a few rows in front of me looked absolutely amazed when his name flashed across the screen. The Fisher Cats, it said, wished him a happy birthday. His parents snapped a photo, the awe still in his eyes even as the grin slid across his face.

In the end, the Fisher Cats lost tonight. But they’ll play again tomorrow. And there’s no crying in baseball. Except for when there is.